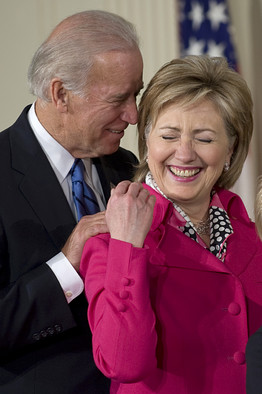 US politics creates some hardcore business deals, even unceremoniously dumping someone for an election.
But one deal won’t die — an Obama-Hillary Clinton set-up for 2012.
From CNN:

“It’s on the table,” veteran Washington Post reporter Bob Woodward told CNN’s John King in an interview Tuesday on John King, USA.
“Some of Hillary Clinton’s advisers see it as a real possibility in 2012.”
The scenario — whereby Vice President Joe Biden and Secretary of State Hillary Clinton would switch positions — has been bandied about by political observers for months, seen by some as a potentially savvy strategy to gin up excitement among what appears to be a depressed Democratic base.

Joe as a diplomat: I don’t know if that’s real-good thinking there, might be a nasty shitload more than “a big fucking deal.”