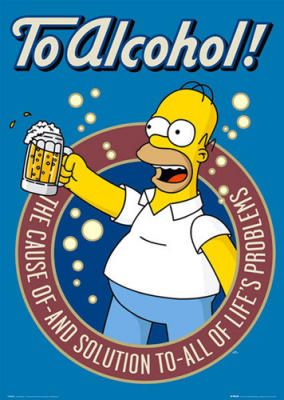 As no stranger to alcohol — currently manager of a liquor store and a former brown-bag drunk — I’m not shocked at a new study out of the UK that found that booze is far worse for society than all the usual suspects, like heroin, crack and crystal meth.

Although the usual suspects were bad for the individual, alcohol was far worse for the unwashed masses.
From the BBC:

The findings run contrary to the government’s long-established drug classification system, but the paper’s authors argue that their system — based on the consensus of experts — provides an accurate assessment of harm for policy makers.
“Our findings lend support to previous work in the UK and the Netherlands, confirming that the present drug classification systems have little relation to the evidence of harm,” the paper says.
“They also accord with the conclusions of previous expert reports that aggressively targeting alcohol harms is a valid and necessary public health strategy.”
…
The new more complex system ranked alcohol three times more harmful than cocaine or tobacco. Ecstasy was ranked as causing one-eighth the harm of alcohol.

The study was conducted by the Independent Scientific Committee on Drugs and published in the Lancet, the Brit medical journal.

This little report comes in time for Prop 19 here in California — making marijuana legal — and anyone with any decent-enough sense can see that a doobie is far-less harmful than a few fingers of Jack Daniels.
Pot sets the standard for a double-standard asshole view for people in regards to booze.
TheÂ AP examines the study:

Experts said alcohol scored so high because it is so widely used and has devastating consequences not only for drinkers but for those around them.
“Just think about what happens (with alcohol) at every football game,” said Wim van den Brink, a professor of psychiatry and addiction at the University of Amsterdam. He was not linked to the study and co-authored a commentary in the Lancet.
When drunk in excess, alcohol damages nearly all organ systems. It is also connected to higher death rates and is involved in a greater percentage of crime than most other drugs, including heroin.
…
Experts said the study should prompt countries to reconsider how they classify drugs. For example, last year in Britain, the government increased its penalties for the possession of marijuana. One of its senior advisers, David Nutt â€” the lead author on the Lancet study â€” was fired after he criticized the British decision.
“What governments decide is illegal is not always based on science,” said van den Brink.
He said considerations about revenue and taxation, like those garnered from the alcohol and tobacco industries, may influence decisions about which substances to regulate or outlaw.
“Drugs that are legal cause at least as much damage, if not more, than drugs that are illicit,” he said.

This past July made it 15 years since I’d had an alcoholic drink — I wish it’d been 30 years.
One of my favorite drinking tricks was to put liquor — beer wasn’t my forte — into the freezer and after a little while the shit went down so smooth, and quick.
Never a mixed-drink fan, I chased it with a bit of water.
What a waste.

A late bloomer with marijuana, I was a senior at the University of Florida when I discovered its most wonderful qualities — I can even remember the date, May 15, 1974, because after I left a friend’s house, stoned as a critter for the first time, went home and watched transfixed as CBS News’ Roger Mudd reported on the Ma’alot massacre terror attack on an Israeli school that killed 16 teenagers — and welcome to real reality.
Pot is a much-weaker sister, however, if combined with booze — you didn’t get higher, you just got more drunk.

And from Saturday’s Sanity Rally was my most-favorite sign: “Why Can’t We Just Get A Bong” — number 47 on a top 100 signs at the gathering found here.