In the short run (one must remember there’s no long run here), the most dangerous and gruesome aspect of last Tuesday’s elections is theÂ asshole defiance of GOPers to climate change — not only are they turning their brains inward, they dragging the world down with them. 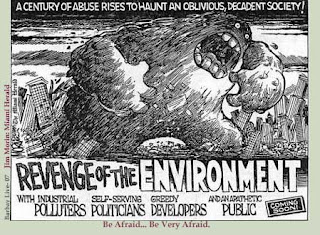 Anyone with any shred of walking-around sense knows that something strange and ominous is happening with the environment, so to deny that goes beyond plain stupid to a spot right at criminal — all this without regard to our children and grandchildren, the ones to really, really experience this horrible shit a-coming.
And up front, too.
Karl Rove is a complete turd-headed, asshole:

“Climate is gone,” said Rove, the keynote speaker on the opening day of a two-day shale-gas conference sponsored by Hart Energy Publishing L.L.P.
And Rove told the trade show, “I don’t think you need to worry” the new Congress will consider proposed legislation to put the controversial practice of hydraulic fracturing under federal rather than state regulation. The procedure, known as “fracking,” is responsible for the dramatic growth of shale-gas drilling in formations such as Pennsylvania’s vast Marcellus Shale.
“I think we’re back to a period of sensible regulation,” said Rove, a commentator on Fox News and in the Wall Street Journal.

And this from Discover magazine:

The U.S. Chamber of Commerce isÂ teaming up with Scholastic (which makes bajillions off textbooks and Harry Potter) to produce an â€œenergyâ€ curriculumâ€“one that neglects environmental consequences and climate change, at least in the materials presented so far (PDF).
Scholastic also offers theÂ â€œUnited States of Energy,â€ another lesson plan/educational program â€œbrought to youâ€ in part by the American Coal Foundation.
Meanwhile, in state after state, anti-evolutionists are arguing not only that we should â€œteach the controversyâ€ around evolution, but that the same goes for other controversial topics as wellâ€“and then global warming inevitably gets roped in.
And the strategy has been working.
In the most infamous case,Â legislators in South Dakota called for â€œbalanced teachingâ€ about global warming in their state.
In one version, their bill justified this assault by noting, â€œthere are a variety of climatological, meteorological, astrological, thermological, cosmological, and ecological dynamics that can effect world weather phenomena [and] the significance and interrelativity of these factors is largely speculativeâ€¦â€

Despite all the science, and the eye witness look-see at horrors in weather, from Pakistan to Russia to the heartland of the US of A, the dis-information, falsehoods and jibber-jabber is going full throttle now that the midterm election has supposedly opened the floodgates on being ignorant.
These people do not seem to understand that climate will affect/effect everybody, not just far away lands with its uneducated, poverty-striken peoples, but here in the US, too.
This is an event and its already here for every man, woman and child.
All kinds of related shit, from the ice cap melting, to wildfires going from bad to worse, to just a plain overall science denial are coming together to create a seemingly perfect storm of horror.

In the face of denial, is the constant fact the GOP’s new plan is in reality just shit thrown at the wall of America to see if anything will stick.
Given that US peoples have a short attention span and apparently believe anything on TV, we’re in for some hard times ahead.
To me, it’s unconscionable, immoral and mean-nasty spirited to deny something the rest of the entire, freaking planet knows it happening, and to not only deny it, but make attempts to roll-back efforts to stop or at least ease the damage — all other serious problems could be put aside to wage war against climate change.
But, of course, we’re dealing with the party of No.