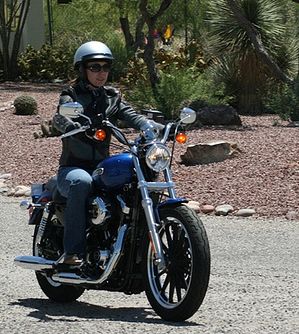 Despite a time when shit events occur fairly often, a real big piece of shit can still make make an impact.
An incident of such monstrous audacity can create a blip on the timeline — the killing yesterday of six people, and the wounding of 14 others, including US Rep. Gabrielle Giffords (at left, on her motorcycle during happier times) might be a horrible watershed event, making life a little bit more terrible and complicated.

Beyond the war-zone carnage, the nasty political atmosphere will poison everyday life.

Guns and politics.
AndÂ a cabdriver that for a few hours was a highly-sought, inspiration-for-a-conspiracy “person of interest” in a national tragedy — what the shit does that cabbie now think?
And the odds — transporting the shooter to the shooting scene, video-taped with the shooter getting the fare, then driving away — of being so close, yet missed by a mile.

And Christina-Taylor Green, the 9-year-old shot shot dead yesterday (an example of tragedy in its pure-form) carrying such an impressive backstory.
Christina’s mom: “I just want her memory to live on, she’s a face of hope, a face of change,” she said. “Stop the violence, stop the hatred.”

In a most-interesting and telling situation, take a look at the Obama London blog, wherein is noted how Sarah Palin’s e-henchmen removed nasty comments from her Facebook page just about as quickly as they were posted — bizarre in an Owellian sci-fi sort of way.
H/t to The Dish, where it was commented: It’s an impressive operation — like watching historical whitewashing in real time.
Those that inflame, just delete, then reload.