On Tuesday, and even after more than two weeks of protest, the crowd in Cairo’s Tahrir Square was by far the largest yet, and even into the wee hours of Wednesday, thousands are still camped there, demanding the Egyptian government cut the bullshit.
Some estimates put the crowd at two million strong at one point Tuesday — the square has been re-nicknamed, the “Republic of Tahrir” — and yesterday considered a tipping point: Tharwat, a 25-year-old musician, finally hit on a comparison: “It’s like Woodstock or something,” he said. There’s no sex or drugs – and apart from nationalist anthems blaring from tinny speakers, not much music either – but the protests that entered their 15th day Tuesday have nevertheless become this Egyptian generation’s Woodstock moment. To the protesters, Tahrir Square is the freest, safest, happiest and truest place in long-repressed Egypt, where no Mubarak joke is off-limits and nothing short of his immediate ouster is acceptable.
The people have more than spoken, they’ve screamed out their collective brains.

One of the major problems is Egypt’s nearly-brand new vice president, Omar Suleiman, one nasty sonofabitch who said earlier this week his country is not ready for democracy, Hosni Mubarak ain’t going anywhere and there’s no real need to end 30-years of emergency law.
Of course, the clueless US piped that Suleiman’s big mouth made some “particularly unhelpful comments,” but again Jumping Joe Biden talked to his Egyptian counterpart and tried to calm the waters.
The problem is that Suleiman is not a trustworthy, nice person — he’s obviously a high-strung political sadist.
Read some more background on Suleiman here.

But who, really, is this guy? 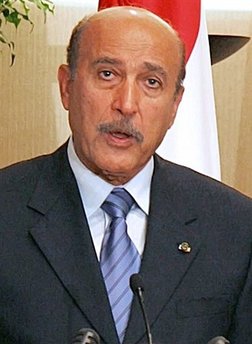 Their names sounded so much alike, I in my ignorance…