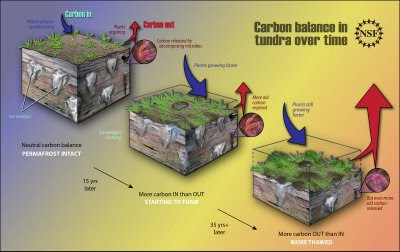 The abstract from a new study via Tellus:

The thaw and release of carbon currently frozen in permafrost will increase atmospheric CO2 concentrations and amplify surface warming to initiate a positive permafrost carbon feedback (PCF) on climate.
…
By 2200, we predict a 29â€“59% decrease in permafrost area and a 53â€“97 cm increase in active layer thickness.
By 2200, the PCF strength in terms of cumulative permafrost carbon flux to the atmosphere is 190 Â± 64 Gt C.
This estimate may be low because it does not account for amplified surface warming due to the PCF itself and excludes some discontinuous permafrost regions where SiBCASA did not simulate permafrost.
We predict that the PCF will change the arctic from a carbon sink to a source after the mid-2020s and is strong enough to cancel 42â€“88% of the total global land sink.
The thaw and decay of permafrost carbon is irreversible and accounting for the PCF will require larger reductions in fossil fuel emissions to reach a target atmospheric CO2 concentration.

Along with the numbers are these most-important and far-reaching words: The thaw and decay of permafrost carbon is irreversible…
As in — we’re up shit creek without a paddle.
The Global Warming Potential here goes beyond enormous — permafrost holds about 1.5 trillion tons of frozen carbon, about twice as much carbon as contained in the atmosphere, much of which would be released as methane. Methane is 25 times as potent a heat-trapping gas as CO2 over a 100 year time horizon, but 72 times as potent over 20 years. (h/t Climate Progress).

From the NSIDC (National Snow and Ice Data Center) and NSIDC scientist Kevin Schaefer on the Tellus-published research:

“The amount of carbon released is equivalent to half the amount of carbon that has been released into the atmosphere since the dawn of the industrial age. That is a lot of carbon.â€
…
The carbon comes from plant material frozen in soil during the ice age of the Pleistocene: the icy soil trapped and preserved the biomass for thousands of years.
Schaefer equates the mechanism to storing broccoli in the home freezer: â€œAs long as it stays frozen, it stays stable for many years,â€ he said. â€œBut you take it out of the freezer and it will thaw out and decay.”

A term that might be applicable in this situation: ‘positive feedback‘ — in a nutshell is ‘A produces B which in turn produces more A,’ and according to Wikipedia Unintended positive feedback may not be “positive” in the sense of being desirable.
And from Science magazine and a study released early last year on permafrost under the East Siberian Arctic Shelf that holds methane and if released could trigger abrupt climate warming.
Other ugly, interesting bits from that research:

“The amount of methane currently coming out of the East Siberian Arctic Shelf is comparable to the amount coming out of the entire world’s oceans,” said Shakhova (University of Alaska Fairbanks scientist Natalia Shakhova), a researcher at UAF’s International Arctic Research Center. “Subsea permafrost is losing its ability to be an impermeable cap.”
…
“Our concern is that the subsea permafrost has been showing signs of destabilization already,” she said. “If it further destabilizes, the methane emissions may not be teragrams, it would be significantly larger.”

A food-bite for thought is that all these studies/research usually records what scientists say are ‘conservative’ or ‘low-ball’ estimates on stuff happening; a lot of this research tends to put serious, day-to-day problems further down the calender road, turn-of-the century, 50-70 years from now, but there’s no knowing what/when nature will do when mankind is way-too involved — fossil fuels must stop, but how and when is the life-hanging question.

Despite the warnings, this shit could happen nearly overnight, hence the word, ‘abrupt.’