â€œI believe the real looting of Iraq after the invasion was by US officials and contractors, and not by people from the slums of Baghdad,â€ said one US businessman active in Iraq since 2003.
— Patrick Cockburn, The Independent, 2/16/09 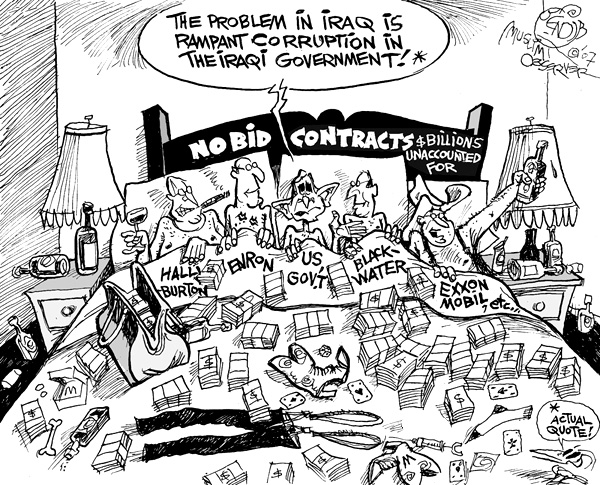 War crimes means more than what one would think.
An official study titled “Commission on Wartime Contracting” and released Thursday revealed billions and billions of US dollars in reconstruction funds for Iraq and Afghanistan have been lost, maybe upwards to $12 billion — and the reason?
From AFP:

The report found that “criminal behavior and blatant corruption” were responsible for much of the waste related to the nearly $200 billion spent since 2002 on US reconstruction and other projects in the two countries.
…
“When it comes to oversight of contingency contracting, we’ve been driving beyond the reach of our headlights. Reforms are badly needed,” said the report.
“For many years, the government has abdicated its contracting responsibilities — too often using contractors as the default mechanism — without consideration for the resources needed to manage them.”

Further, from Bloomberg News: “War by its nature entails waste,” the report said. “But the scale of the problems in Iraq and Afghanistan also reflects the toxic interplay of huge sums of money pumped into relatively small economies and an unprecedented reliance on contractors.”
Last year, about 200,000 contract employees — primarily non-Americans — supported US operations in Iraq and Afghanistan, a figure roughly equal to the number of military personnel in the two war zones.
In an age of the long war, the US manages by using private contractors for everything, from food for troops to security, and in an age ofÂ  The Dick‘s no-bid contracts, these assholes could and can suck up the cash and high-tail it.
See a partial list of US defense contractors complied by Wikipedia here.
And in the midst of vile corruption, the big US defense contractors made some great profits, and put cash where it was needed — Raytheon contributed nearly a million dollars to various defense-related political campaigns in the presidential election year of 2004, spending much more than that on lobbying expenses.

The commission’s report this week also recommended way-more oversight of these contractors and noted: â€œU.S. governmentâ€™s limited jurisdiction over criminal behavior and limited access to records, have contributed to an environment where contractors misbehave with limited accountability.â€
And make tons and tons of taxpayer-fed money.

Paul Krugman, in his column in the New York Times yesterday, touches briefly upon Iraqi reconstruction in tying the chaos in Madison, Wis., to corporations’ grabbing more and more power — a no-bids grab to own it all.

As many readers may recall, the results were spectacular — in a bad way.
Instead of focusing on the urgent problems of a shattered economy and society, which would soon descend into a murderous civil war, those Bush appointees were obsessed with imposing a conservative ideological vision.
Indeed, with looters still prowling the streets of Baghdad, L. Paul Bremer, the American viceroy, told a Washington Post reporter that one of his top priorities was to â€œcorporatize and privatize state-owned enterprisesâ€ — Mr. Bremerâ€™s words, not the reporterâ€™s — and to â€œwean people from the idea the state supports everything.â€

And leaving the regular, ordinary Jack American holding an empty bag.
Stealing is still a crime, war or not.