Hence, we now understand the operational capacity ofÂ  ‘sphincter-says-What‘-Republicans and other asshole entities. 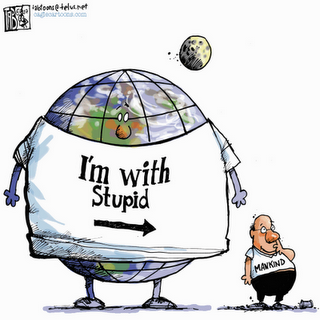 Yesterday, I put $20 worth of gas in my Jeep Comanche, but we won’t go real far at $4.39 a gallon — four cents higher than on Monday when I last dribbled some fuel into the Jeep’s tank.
Meanwhile, at the UK blog liveoilprices: In London, Brent crude oil futures for June 2011 delivery was trading at $122.25 a barrel, 07.30 GMT this morning on the ICE Futures Exchange.
And US Light crude oil futures for May 2011 delivery was trading at $108.26 a barrel — tightened the old seatbelt, boys, the ride’s gonna get hairy.

This good green earth of ours is finally screaming, ‘Enough!’
As Japan raised the threat level at its Fukushima plant to the same rank as the Chernobyl disaster on Tuesday, the situation there continues to go further and further downhill — mankind has finally met its match and we’re the losers.

Michael Klare has a good post on the earth’s revolt up at tomdispatch, which shifts the view of the planet from victim to avenger — one can take shit just so long.
Klare delves at environmental scholar and activist Bill McKibben’s book from last year, Eaarth: Making a Life on a Tough New Planet, and takes the process a few steps further.
A few nuggets:

The Eaarth that McKibben describes is a victim, a casualty of humankindâ€™s unrestrained consumption of resources and its heedless emissions of climate-altering greenhouse gases.
True, this Eaarth will cause pain and suffering to humans as sea levels rise and croplands wither, but as he portrays it, it is essentially a victim of human rapaciousness.
With all due respect to McKibbenâ€™s vision, let me offer another perspective on his (and our) Eaarth: as a powerful actor in its own right and as an avenger, rather than simply victim.
…
Our planet is a complex natural system, and like all such systems, it is continually evolving.
As that happens — as continents drift apart, as mountain ranges rise and fall, as climate patterns shift — earthquakes, volcanoes, tsunamis, typhoons, prolonged droughts, and other natural disturbances recur, even if on an irregular and unpredictable basis.
Our predecessors on the planet were deeply aware of this reality.
After all, ancient civilizations were repeatedly shaken, and in some cases shattered, by such disturbances.
For example, it is widely believed that the ancient Minoan civilization of the eastern Mediterranean collapsed following a powerful volcanic eruption on the island of Thera (also called Santorini) in the mid-second millennium BCE.
Archaeological evidence suggests that many other ancient civilizations were weakened or destroyed by intense earthquake activity.
In Apocalypse: Earthquakes, Archaeology, and the Wrath of God, Stanford geophysicist Amos Nur and his co-author Dawn Burgess argue that Troy, Mycenae, ancient Jericho, Tenochtitlan, and the Hittite empire may have fallen in this manner.
…
In this context, the folly and hubris with which weâ€™ve treated natural forces comes strongly into focus. Take whatâ€™s happening at the Fukushima Daiichi nuclear power complex in northern Japan, where at least four nuclear reactors and their adjoining containment pools for â€œspentâ€ nuclear fuel remain dangerously out of control.
The designers and owners of the plant obviously did not cause the earthquake and tsunami that have created the present peril.
This was a result of the planetâ€™s natural evolution — in this case, of the sudden movement of continental plates.
But they do bear responsibility for failing to anticipate the potential for catastrophe — for building a reactor on the site of frequent past tsunamis and assuming that a human-made concrete platform could withstand the worst that nature has to offer.
Much has been said about flaws in design at the Fukushima plant and its inadequate backup systems.
All this, no doubt, is vital, but the ultimate cause of the disaster was never a simple design flaw.
It was hubris: an overestimation of the power of human ingenuity and an underestimation of the power of nature.

Arrogant assholes be us humans.