â€œThe invasion of Iraq I believe will turn out to be the greatest strategic disaster in U.S. history.”
— Retired Army Lt. Gen. William Odom, 2005 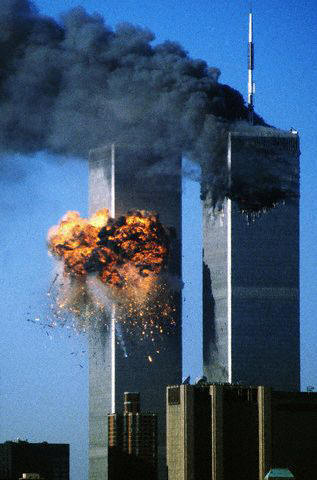 The late Gen. Odom — he died in June 2008 — was one the earliest outspoken critics of George Jr.’s horrible foray into Iraq, astutely commenting in 2007: “The president’s policy is based on illusions, not realities,” he wrote. “There never has been any right way to invade and transform Iraq.”
Osama bin Laden’s legacy is carried upon the hard-ass backs of George Jr. and his nefarious crowd.

Of course, we now know Iraq was in George Jr.’s gun-sights long before Sept. 11, 2001, with the Twin Towers horror just the starting gun — the big question is how the freakin’ f**k did Osama know George Jr. would way-way-over-react and tear the world asunder?

Despite a shitload of George Jr.’s supporters claiming the x-prez had a great hand in Osama’s killing this past weekend, the reality of the reality is the exact opposite.
Read an excellent lowdown on the historical revisionists low-life’s at ThinkProgress.
From Patrick Cockburn, one of the best Middle East observers, in a post at Counterpunch:

Its (Al-Qaeda) success has not been all its own doing.
Ayman al-Zawahiri, al-Qaedaâ€™s number two and chief strategist, wrote at the time of 9/11 that the aim of the group was to lure the US into an over-reaction in which it would â€œwage battle against the Muslims.â€
Once the US was committed to a ground war, and no longer exercised its power primarily through local surrogates, the way would be open for Muslims to launch a jihad against America.
By over-reacting, President Bush, aided by Tony Blair, responded to 9/11 very much as al-Qaeda would have wished.
…
The US itself played a role in the expansion of al-Qaeda.
In Iraq the US army spokesman in Baghdad attributed all armed attacks to al-Qaeda regardless of who carried them out.
He hoped thereby to discredit the insurgents in the eyes of Shia Iraqis and the outside world.
But within Iraq this only added to the high profile of the organization among those hostile to the new order of things, while abroad it made it much easier for al-Qaeda to raise money.
The wave of anti-Americanism that swept the Muslim world after the invasion of Iraq also benefited the group.
One vicious aspect of al-Qaeda activities is always under-reported in the western media: It has always killed more Shia Muslims than it ever did Americans.
The US occupation of Iraq benefited the group, but it was sectarian before it was nationalist.
The Shia were seen as heretics as worthy of death as an American or British soldier.
Again and again its suicide bombers would target Shia day laborers as they waited for work in public squares in the early morning in Baghdad or massive bombs would be detonated as Shia worshippers left their mosques.
Likewise in Pakistan the Pakistan Taliban, ideologically linked to al- Qaeda, has shown equal enthusiasm for slaughtering Shia where ever they can be targeted.

George Jr. gave Osama and his boys a get out of jail card with the invasion of Iraq, even disbanding the CIA bin Laden search to more concentrate on the chaos flaming up in Iraq.

And what about Iraq?
And now eight years later, how are these peoples doing?
From antiwar.com just for Tuesday:
In Baghdad, a car bomb rocked the poor, Shiâ€™ite neighborhood of Abu Dsheer, leaving 16 dead and 37 wounded. Another blast killed a driver and wounded two others, including the grain board director. Nearby, a bomb killed a female government employee. Three people were wounded in a bomb blast in Doura. Another blast left one person with injuries in Nasser Square. Two civilians were shot dead last night in Hurriya.

And in the Iraqi nightmare came the al-Qaeda — not there until the US showed up.
William Blum further dissects:

Unfortunately, they’ve lost just about everything else as well.
Twenty years of American bombing, invasion, occupation and torture have led to the people of that unhappy land losing their homes, their schools, their electricity, their clean water, their environment, their neighborhoods, their archaeology, their jobs, their careers, their professionals, their state-run enterprises, their physical health, their mental health, their health care, their welfare state, their women’s rights, their religious tolerance, their safety, their security, their children, their parents, their past, their present, their future, their lives … more than half the population either dead, disabled, in prison, or in foreign exile … the air, soil, water, blood and genes drenched with depleted uranium … the most awful birth defects … unexploded cluster bombs lie in wait for children … a river of blood runs alongside the Euphrates and Tigris … through a country that may never be put back together again.

Ah, that about covers it.

But what about US peoples all this time?
The US public seems pretty pissed at Pittsburgh Steelers running back Rashard Mendenhall, who wondered on Twitter about the ethic, morals and humanity of celebrating a death.
Jason Ditz observes at antiwar.com:

Mendenhallâ€™s comment was a paraphrase of Matthew 7:1, a part of the biblical Sermon on the Mount termed the â€œdiscourse on judgementalism.â€ Though the sermon is considered the canonical word of God throughout Christendom, there is a considerable debate among Christians today over whether there is an implied Osama Exemption within the sermon that permits Christians to celebrate his slaying.

Osama bin Laden was an asshole killer and much-better off dead, but a celebration is just freakish.