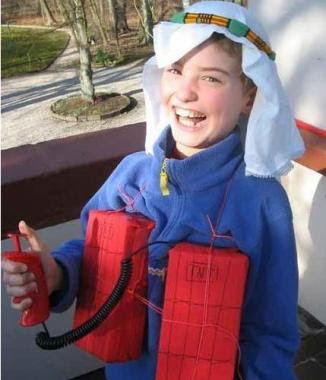 Insurgents tricked an 8-year-old girl in a remote area of central Afghanistan into carrying a bomb wrapped in a cloth and then detonated the bomb remotely when she was close to a police vehicle, Afghan authorities said yesterday.
Only the girl was killed in the blast on Saturday, which occurred in Uwshi Village of Charchino District, said Fazal Ahmad Shirzad, the police chief of Uruzguan Province.
Shirzad said he believed that the girl was completely unaware that the bag that she had been given by Taliban insurgents held a bomb.

The fun-looking child above is some US kid dressed for Halloween — might just be the same age (maybe a bit older) than that poor girl in central Afghanistan, but the sense of that photograph is the end result what never-ending war does to everybody.
What kind of mental attitude — Christian, Muslim, Hindu, what-the-fuck-ever — would trick a little girl into blowing herself to bits?
People without a soul — far, far worse than just being a terror-inducing asshole.

And what about this shit?

A suicide bomber in a wheelchair blew himself up at the entrance to a police station north of the city yesterday, killing three people and wounding 18, officials said.
Two police officers were killed and 10 injured in Tarmiyah, about 30 miles north of Baghdad, authorities said.
The head of the Tarmiyah city council, Qassim Khalifa, said it was not clear whether the bomber was really disabled or using the wheelchair as a way to deflect attention from security.
The bomber went to the police station saying he needed a letter from the police certifying he had been maimed in a terror attack, Khalifa said.
Iraqis who have been disabled from a bombing or shooting can receive compensation from the government if their injuries are documented.
â€œPolice inspected him but not very carefully as he was handicapped or pretending to be handicapped, so they let him go inside the police reception area where the blast occurred,â€™â€™ he said.

Iraq is again becoming a nasty place for US troops — two were reported killed Sunday in the north, bringing to 11 the number who died just this month.
Along with our GIs, 17 Iraqi civilians were killed over the weekend, wounding another 17 — thank-you George Jr. for creating a nightmare.

And back to suicide — it’s now apparently a part of the wedding vows, wearing a bomber’s vest together.
From the BBC:

A husband and wife carried out a suicide attack that killed eight people at a police station in north-western Pakistan, the Taliban has said.
The attack took place late on Saturday in Kolachi, near the tribal region and Taliban stronghold of South Waziristan.
The pair entered the police station dressed in burkas, hiding rifles, hand grenades and suicide vests underneath.
They held staff hostage for several hours before detonating themselves, killing seven officers and a tea boy.
The pair pretended that they had a complaint to make when they initially entered the station before removing their burkas and launching an assault.
…
The BBC’s Orla Guerin, in Islamabad, says that the use of a husband and wife suicide squad by the Pakistani Taliban is a new tactic, and a new threat.
Already, our correspondent adds, the militants have resorted to using children as human bombs. And a suicide attack in Pakistan’s tribal areas last December was blamed on a woman bomber.

And ‘a tea boy?’
Along with this terror marriage in Iraq: Meanwhile, an Iraqi court has sentenced the wife of a slain Al Qaeda leader to 20 years in prison on terrorism-related charges, an Iraqi judicial spokesman said. Hasna Ali Yahya, the Yemeni wife of Abu Ayyub al-Masri, was convicted of facilitating correspondence between insurgents and preparing explosive-laden belts.

This is war waged without a soul.