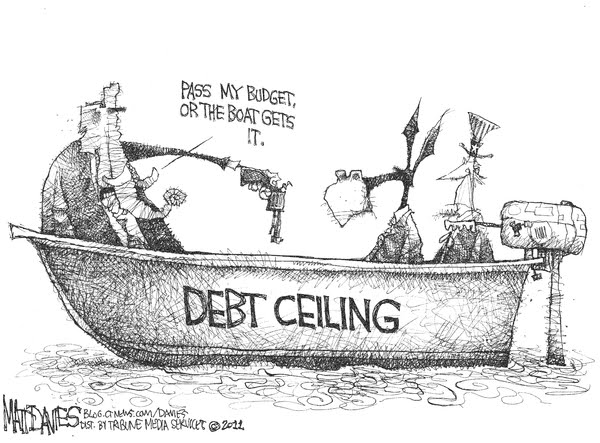 One must always keep in mind when giving any thought to how Republicans govern to this heart-felt comment from mush-faced twit Mitch McConnell from last October: “The single most important thing we want to achieve is for President Obama to be a one-term president.”
All GOP action dovetails to this one, succulent point.

In the history of US politics there has never been a more nasty-toned political debate (unless one looks back to the election of 1876) over some of the most-dangerous and long-lasting problems facing this country — a seemingly perfect storm of energy, financial and environmental disasters already gathered and just waiting for the final size 10 shoe to drop.
And it’s pretty close.

In just more than a month, the gong will chime on the now-infamous US debt ceiling — the debt deal is a cap set by Congress on the amount of debt the federal government can legally borrow, first instituted in 1917 with a ceiling at $11.5 billion, the whole thing is now out-of-whacked-control as the tally is currently at $14.294 trillion.

Despite President Obama’s seemingly willingness to compromise, a couple of GOP pricks Eric Cantor and John Kyl (not to be confused with calling Obama a dick)) took a power from the talks, took whatever balls they have, put them in a mayonnaise jar and went home.
From Forbes:

Still believe that the Republicans really want to make a deal?
They do not — at least not unless they get it at 100 percent in spending cuts with a big goose egg in raised revenues.
Our governing system is built on good faith negotiations and compromise.
Yet, clearly, one of our political parties participating in this discussion has no interest in perpetuating that system.

Indeed.
There’s been so much bickering, even Obama quipped at his presser Wednesday night: “They are in one week, they are out one week,” he said. “You need to be here. I’ve been here. I’ve been doing Afghanistan and bin Laden and the Greek crisis.”
The GOP don’t give a shit, however.
They are willing to blow the US boat out of the water instead of trying to bring this fractured place into some kind of normal, easier-to-manage operation, and all they seemingly know how to do to cry, whine and lie.
All of the GOP presidential candidates just make shit up — a must read is Matt Taibbi’s profile in Rolling Stone magazine of total nutcase, flipped-out crazy Michele Bachmann, who could be the ultimate Republican front-runner in 2012.
What a mess.

Paul Krugman in his column in the New York Times this morning nails the GOP onto the block:

Bear in mind that G.O.P. leaders donâ€™t actually care about the level of debt.
Instead, theyâ€™re using the threat of a debt crisis to impose an ideological agenda.
If you had any doubt about that, last weekâ€™s tantrum should have convinced you.
Democrats engaged in debt negotiations argued that since weâ€™re supposedly in dire fiscal straits, we should talk about limiting tax breaks for corporate jets and hedge-fund managers as well as slashing aid to the poor and unlucky.
And Republicans, in response, walked out of the talks.
So whatâ€™s really going on is extortion pure and simple.
As Mike Konczal of the Roosevelt Institute puts it, the G.O.P. has, in effect, come around with baseball bats and declared, â€œNice economy you have here. A real shame if something happened to it.â€