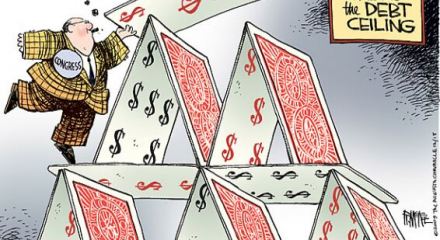 Even beyond the way-hot weather in the central and eastern US, the disastrous wars all over the globe, and finally even beyond Casey Anthony, the news tearing at the very tattered fabric of everyday life is the infamous, so-called debt ceiling bullshit in which the whacks in DC are deeply bickering.
Although, there’s been blubberings about Aug. 2 as the deadline, the US actually struck the debt ceiling last May 16 at the $14.294 trillion mark — the August date is the final line.

“I’ve been hearing from my Republican friends for some time it is a moral imperative to tackle our debt and deficits in a serious way,” Mr. Obama said.
“What I’ve said to them is, let’s go.”
The president said today he would not accept a smaller, short-term deal.
“We might as well do it now,” he said. “Pull off the band aid. Eat our peas.”

I have no idea what Obama was taking about, unless he was trying to discuss the deep, black hole between the White House and the self-centered, asshole GOP — Mitch McConnell cried that as long as Obama’s in the White House, “a real solution is unattainable.”
Pretty much sums up the shit.

The debt ceiling scenario has been around since 1917 with the passage of the Second Liberty Bond Act, which helped finance the United States’ entry into World War I — the first notch was at just $11.5 billion.
The tally eased its way slowly up over the years, but really hit the skids the past decade.
In June 2002, it was a paltry $6.4 trillion — after George Jr.’s eight years of horror, its at the current mark achieved in May.
Since 1960, the debt limit was monkeyed with 78 times — 49 during Republican administrations and 29 during Democratic ones.

This whole theater of the financial world might just be political bullshit.
From Calculated Risk and the debt ceiling charade:

(Congress will probably push this to the brink, but they will raise the debt ceiling before the country defaults. The first rule for most politicians is to get re-elected, and the easiest way to guarantee losing in 2012 is to throw the country back into recession. If that happened, I believe the voters would correctly blame the leaders of Congress, and I think Congress knows that too. Therefore it won’t happen. I’m not worried and neither are investors.)

We are almost to the “brink”.
Let me add: In this case, voters would blame the Republican party, and if the debt ceiling is not raised, the “Republican” brand would become toxic and synonymous with fiscal irresponsibility.
The leaders of Congress know that and they will scramble to find a solution. I doubt this is the end of the GOP 🙂

However, do we have to eat our peas with a butter knife?