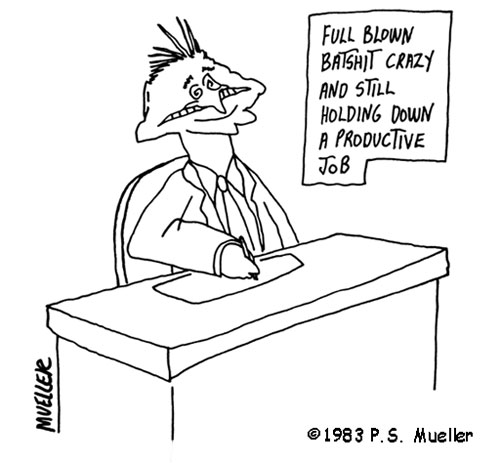 Left my post for just a week and imbecilic chaos ensues.
As if in a fevered nightmare, the peoples of the world, and especially US peoples have taken complete leave of any known sense, and have fully and absolutely embraced bat-shit crazy.

On the far side of Wall Street, which had the wildest ride in its history — rising and falling 400 points in just four days — there’s the mob approach to city life, both here and abroad, plus the GOP Iowa Straw poll, which revealed Republicans are tightening up their own nutcase.

The US is in the grip of financial funk and nowhere to run.
From CNN last week:

The evidence: an unemployment rate over 9 percent, the S&P downgrade of the U.S. bond rating, troop deaths in Afghanistan, soaring government deficits, a ballooning national debt, the dollar getting pummeled overseas, yo-yo gas prices and gridlock in Washington that has stalled virtually everything.
America, it appears, is stuck.

And it’s not going to get unstuck any anytime soon.

Even cheap credit won’t do it: On Friday, preliminary data showed that the Thomson Reuters/University of Michigan consumer sentiment index had fallen this month to lower than it was in November 2008, when the country was deep in recession.
People are just scared.

And they might take to the streets.
In the UK, it’s public warfare — 1,580 people have been arrested in a week.
David Cameron blames “slow-motion moral collapse …” and his little pep talk today included words that should respond with US peoples:

“Irresponsibility.
Selfishness.
Behaving as if your choices have no consequences.
Children without fathers.
Schools without discipline.
Reward without effort.
Crime without punishment.
Rights without responsibilities.
Communities without control…”

Meanwhile, in Philadelphia USA, flash mob violence has gripped the city as marauding teenagers have caused a shit-storm there, wrecking havoc in the blink-of-an-eye, and like all good revolutions nowadays, the gangs use social media to co-ordinate their activities.
Mayor Michael Nutter pulled a David Cameron with a streak of mean:

Our mayor, speaking from the pulpit of his home church, called the youths involved “ignorant,” “stupid,” “butthead,” pants-sagging byproducts of “sperm donors” and “human ATMs” wreaking havoc on innocent people in Center City.

And meanwhile in Iowa this past weekend, the bat-shit hugged hard the pants of the crazed GOP.
One has to keep in mind Michele Bachmann has been certifiable a long, long time.
My most favorite — Michele just loving George Jr. at the 2003 State of the Union address.
See the video here.