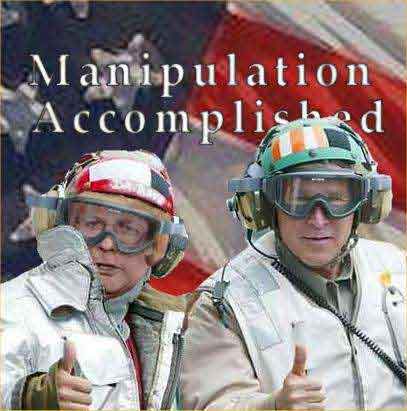 In the annals of US armed conflict, George Jr. and his gang is way-unique — they’re obvious war criminals.
If their actions had taken place in another country, the whole bunch would have been hunted down by now and shipped to The Hague for trial — instead, they write books, blubber nonsensical bullshit and lounge in good health and wealth.

George Jr. knows it too.
Last February, the little shit abruptly cancelled a Geneva, Switzerland, speaking engagement after reports of the possible filing of an official criminal complaint against him about torture of U.S.-held detainees.

Katherine Gallagher, an attorney with the New York-based Center for Constitutional Rights: “Whatever Bush or his hosts say, we have no doubt he cancelled his trip to avoid our case,” said Gallagher. “The message from civil society is clear — if you’re a torturer, be careful in your travel plans.”

Except within the safe confines of the US of A.
And this in spite of war-crime-related charges being there, in plain sight, and even from within the US government.
In June 2008, the US Senate Select Committee on Intelligence released its report on intelligence slapped together for Iraq, a country which seemingly required invasion.
From the committee’s press release and chairman of the group, Jay Rockefeller:

â€œBefore taking the country to war, this Administration owed it to the American people to give them a 100 percent accurate picture of the threat we faced.
Unfortunately, our Committee has concluded that the Administration made significant claims that were not supported by the intelligence,â€ Rockefeller said.
â€œIn making the case for war, the Administration repeatedly presented intelligence as fact when in reality it was unsubstantiated, contradicted, or even non-existent.
As a result, the American people were led to believe that the threat from Iraq was much greater than actually existed.â€
â€œIt is my belief that the Bush Administration was fixated on Iraq, and used the 9/11 attacks by al Qaâ€™ida as justification for overthrowing Saddam Hussein.
To accomplish this, top Administration officials made repeated statements that falsely linked Iraq and al Qaâ€™ida as a single threat and insinuated that Iraq played a role in 9/11.
Sadly, the Bush Administration led the nation into war under false pretenses.
â€œThere is no question we all relied on flawed intelligence.
But, there is a fundamental difference between relying on incorrect intelligence and deliberately painting a picture to the American people that you know is not fully accurate.”

Based on that shit alone, some kind of legal action should have been taken by now, or at the bare-ass minimum, at the least some low-level public inquiry on the validity of the committee’s press release.
Enter Mr. Barack Obama.

If one has been paying even somewhat close to attention to detail, the release in mid-July by the group, Human Rights Watch, of its 107-page report,, “Getting Away with Torture: The Bush Administration and Mistreatment of Detainees,” wasn’t a bell-sounding news event in terms of actual life.
Pretty much the same story over the past couple of years, maybe longer — double-standards and violations of actual international accords and treaties signed by the US, and yes, even public statements by some of these assholes to the effect of, ‘Yeah, I tortured, so fuck off!‘
In this particular case, I believe to shame, that nothing will ever be done.
Although HRW’s report of “overwhelming evidence” and presentations of “substantial information warranting criminal investigations,” looks and sounds good, the real-time reality of any of those clowns ever ending up anywhere-near a jail cell is so way-down-the-road it’s never going to happen.
And the reason?

Nat Hentoff explains in a piece atÂ  The Star Democrat on the HRW report that it’s a vital requirement for future generations of US peoples that the current US peoples hold account those who ordered torture, and get rid of the nefarious US double-standard, a tool for al-Qaeda recruitment.
The last couple of lines of Hentoff’s story, though, cops the deal: Not one of the aspiring Republican candidates for the presidency next year has said a word about this. And Obama cherishes their silence.

On a lot of stuff, especially with foreign policy, Obama’s been a frickin’ turncoat.

Although in those most-wonderous (and more dreamy than then realized) just after Obama’s election — November 2008 — there were news stories on reported rumors that then-president George Jr. might issue a blanket pardon for everybody involved, including his-own-self, but the guy shouldn’t have worried.
From the UK’s The Independent in April 2009:

Only last weekend Rahm Emanuel, the White House chief of staff, was re-iterating what his boss was saying even before he was inaugurated.
A new administration meant a new beginning.
It was time to “move on” and, Mr Emanuel indicated, the former White House and Justice Department officials who formulated the policy, as well as the CIA operatives who had carried them out, should not be prosecuted.

And in spite of an occasional legal side-glance/lip service at the issue, Obama has stood by “move on” and its implication that all those war criminals should not be prosecuted.

In being such a set of unique war criminals, George Jr.’s little group is also responsible — beyond torture — for mass death and great, horrible suffering.
Iraq greatly suffered/and is still suffering from the dubious US invasion — according to Iraq Body Count through July 24, 2011, an estimated more than 102,000 to near 112,000 Iraq civilians have been killed (other estimates are much higher — the Lancet study claimed the deaths caused by the U.S. invasion of Iraq rivaled the death toll of the 1994 Rwandan genocide).
And Iraq, along with Afghanistan, are now just one long fire fight — yesterday in Iraq, a day of what’s considered “very light violence,” five Iraqis died, including this incident: In Hadid, a sticky bomb placed on an education department employeeâ€™s car exploded and killed three family members.
An so it goes…

Meanwhile, back at the ranch.
George Jr.’s escapades have cost a generation of young people most dearly.
Not only have 4,474 US GIs have died, along with more than 32,172 wounded, more than 300,000 troops suffer from all kinds of PTSDs (18 to 20 percent of the whole force) and more are killing themselves — 32 US Army soldiers committed suicide last month (a record) and even veterans in college now have a much higher risk of suicide than a regular, non-veteran student.
What a horrible mess.

And back to that Senate Select Committee and a most-poignant story in yesterday’s Stars and Stripes on the death of a US GI in August 2003, just just four days after his 20th birthday.
Some snips:

Army Spc. Justin W. Hebert’s story is sad and sadly unremarkable, a tragedy bound up in the tale of a grinding war that took young lives with grievous regularity.
Nearly one-third of U.S. troops killed in Iraq were age 18 to 21.
Well over half were in the lowest enlisted ranks.
For Hebert, the Army was an adventure. But it didn’t last long.
…
It was Aug. 1, 2003.
The war, according to the Pentagon’s plan, was supposed to be over.
Baghdad had fallen swiftly.
But a new, more menacing phase of conflict was just beginning.
An insurgency was in the making, and in its formative months it perplexed U.S. commanders and cost Hebert his life.
In the years since, the U.S. effort in Iraq has veered from the brink of calamity to the threshold of surprising success.
With the remaining U.S. troops now packing to leave, possibly for good, casualties and costs will be tallied one last time.
…
The sacrifice of so many lives like Hebert’s helped turn U.S. public opinion firmly against the war by the time Barack Obama was campaigning for president in 2008.
Three years later, young Americans still die in Iraq even though the war is widely seen as over.
It is also widely seen as a mistake, and by some as a waste.

And a crime that cries for justice.
Torture is a side-issue when it comes to real-shit horror on a mass scale and those who perpetrated it should be held accountable — Sadly, the Bush Administration led the nation into war under false pretenses.

Prosecute the lie, but, alas Obama’s not so much for change, but for ‘move on.’
To the utter shame of all Us peoples.