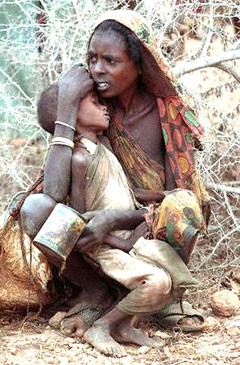 As US peoples get ready to wallow in way-much sob-worthy self-agony for the 10th anniversary of the World Trade Center attack, other peoples are dying like gnats and flies — literally.

As horrific and criminally insane those attacks were, US peoples will always be self-centered, self-indulgent in celebrating the event until we can come to grips and bring to light of justice the ugly, bloodcurdling shit which took place after Sept. 11, 2001.

Lost in all kinds of other so-called newsworthy items this morning is the massive human catastrophe taking place in the Horn of Africa — the situation there has deteriorated and 750,000 people, mostly women and children, are now threatened with a real-bad way to die.
Those “roads of death” supposedly leading to food centers are littered with the bones of children — 29,000 dead in just 90 days.

And an estimated 1,300 children are dying every day.

From Aljazeera English and an interview with Imtiaaz Sooliman, the head of Gift of The Givers, a humanitarian organisation from South Africa:

In my 19-years-experience, I would say that that this was the worst crisis I have ever seen.
It is not like Bosnia where there was war, or an earthquake like Haiti where there was structural damage to buildings.
Here there is slow death in front of your eyesâ€¦ we are talking about four million people affected, mostly children.
Every parent with five or six children are forced to watch their children waste away, day by day.
And we are not talking about one household, we are talking about tens of thousands of households across the country, from the south to Mogadishu.
…
To put it into perspective: A two-year-old child begins to look like a three-month-old baby within some weeks.
And again, we are talking about thousands.
And parents are emotionally and psychologically affected, because there is nothing they can do to save the child.
Imagine watching your child die in front you.
It is a slow, painful process and for 12 to 16 weeks you go through this agony knowing that there is nothing you can do.
Consider that we have just completed the month of Ramadan — where children in many countries fast from dawn to dusk.
Normally when children fast and towards the late afternoon, they might complain that they want to break the fast because of their hunger and as a parent you say, “it will end soon” so hold on â€¦ they might cry but they know that there are only a few hours remaining, and then they can choose whatever they want to eat.
But these kids here in Somalia, the tears have long since dried up and there is no expectation of food. There is just nothing to eat.
The figures are startling: Every day 1,300 children die.
…
It is not possible to make sense if you are not in it.
Television pictures do not tell the full story.
Being in it captures more than just the essence and a picture cannot tell you the scale of the damage, the emotional suffering, the individual stories — but given the nature of people — consider South Africa — an entire nation has still mobilised for Somalia.
We have received unprecedented support.
Seeing the pictures of children so emaciated has touched the hearts of people.
There has never been such a campaign in the history of this country.

As a parent, a horrifying situation I’d hope US peoples never have to experience.
This morning, nothing but celebrations of death all over the world.