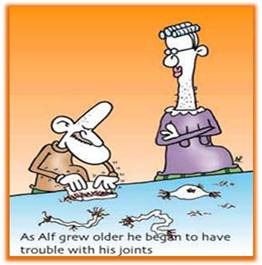 Living in the nowadays apparently makes a lot of people scared of just about everything, and the real ‘new normal‘ is the high-abundance of paranoia.
And this delusion of persecution, this extreme, irrational distrust of others is not induced by any ingested drug, but comes from a shitload of people’s own natural body fluids.

Marijuana has a vast history of bad press, but most of it came from within the head of dopes.
(Illustration found here).

Marijuana has a much-longer history than just from the 1960s.
And until 1930s America, pot had a favorable past, but then fright, lies and bullshit took effect:

For most of human history, marijuana has been completely legal.
Itâ€™s not a recently discovered plant, nor is it a long-standing law.
Marijuana has been illegal for less than 1 percent of the time that itâ€™s been in use.
Its known uses go back further than 7,000 B.C. and it was legal as recently as when Ronald Reagan was a boy.

Then the Marijuana Tax Act of 1937, which without any other reason other than politics, banned the smoke and highly-demonized it.
The act was pushed through the US Congress without much ado: Member from upstate New York: â€œMr. Speaker, what is this bill about?â€ Speaker Rayburn: â€œI donâ€™t know. It has something to do with a thing called marihuana. I think itâ€™s a narcotic of some kind.â€

There we have up to this day.

What induced this particular marijuana-subjected post was GOP politics — twitch-faced, neurotic-acting Rick Santorum’s queasy take on another Republican presidential candidate, Rick Perry, and Perry’s view of the bud.
Stone-headed Perry proclaimed in his epic tome, ‘Fed Up,’ that marijuana is just like gay marriage — it’s up to the states: “If you donâ€™t support the death penalty and citizens packing a pistol, donâ€™t come to Texas,” Perry wrote. “If you donâ€™t like medicinal marijuana and gay marriage, donâ€™t move to California.”
What an asshole.
Anyway, Santorum took a snort off some Bachmann Booze and jumped into Perry’s shit.
Via Raw Story:

“Itâ€™s certainly Gov. Perry right to believe marriage can be redefined at the state level, that marijuana can be legalized and that tax dollars should be used to give illegal aliens special college tuition rates, but thatâ€™s completely out of touch with what most Americas believe,” Santorum spokesman Hogan Gidley told The Washington Post.
Santorum recently told CNN’s Piers Morgan that he had smoked marijuana while in college.
â€œI admitted back when I was running for the Senate that when I was in college I smoked pot, and that was something I did when I was in college, and it was something that Iâ€™m not proud of, but I did it,â€ he said.
â€œAnd it is something I wish I hadnâ€™t done, but I did and I admitted it and would encourage people not to do so.â€

Dude, anything would help your dip-wad, pathetic existence, but a bowl a day would surely settle your ass down, and, encourage people to think you’re somewhat normal.

Fecal matter Santorum is the one out of touch — US peoples are wanting the pot ban lifted.
In a recent Angus Reid Public Opinion poll 55 percent of respondents reported marijuana should be legalized and the issue is broken down by politics — Democrats favor legalization by 63 percent, Independents at 61 percent, and, wouldn’t you know it, scared Republicans are dropping at 41 percent.
The GOP is running against the vast majority of US peoples in a variety of stuff.

Even if the official line is hatred of marijuana, the US government is an asshole hypocrite and has been doping the public:

The U.S. government considers marijuana among the worldâ€™s most dangerous drugs, classifying it as a highly-addictive substance that has no medical use.
But thereâ€™s a catch: The government also supplies four people with 300 marijuana cigarettes each month. They are patients in the governmentâ€™s Compassionate Investigational New Drug Program.
…
The pot is grown in Mississippi as part of the governmentâ€™s research into marijuana. Itâ€™s then sent to a facility in North Carolina, where it is rolled into cigarettes.
The government distributed more than 100 pounds of high-grade marijuana to patients between 2005 and 2011.

Lock, load and light up — a shot of Jack Daniels, now, that’s some scary shit!