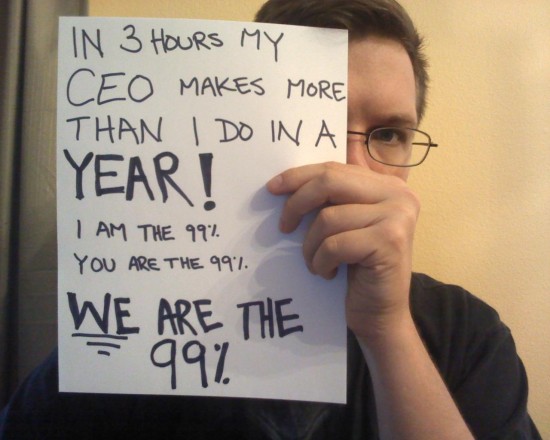 Another brick in the wall: In the midst of a seemingly worldwide occupation-movement, science may have confirmed the protesters’ worst fears.

Reportedly, about 147 super-connected corporations — out of 43,000 studied in recent research — carry disproportionate power over the global economy.
This from NewScientist on research by a trio of complex systems theorists at the Swiss Federal Institute of Technology in Zurich into transnational corporations — TNCs — that’s good, but disheartening:

“Reality is so complex, we must move away from dogma, whether it’s conspiracy theories or free-market,” says James Glattfelder.
“Our analysis is reality-based.”

Also from the NewScientist piece on the study’s findings (h/t: War in Context):

The work, to be published in PloS One, revealed a core of 1318 companies with interlocking ownerships.
Each of the 1318 had ties to two or more other companies, and on average they were connected to 20.
Whatâ€™s more, although they represented 20 per cent of global operating revenues, the 1318 appeared to collectively own through their shares the majority of the worldâ€™s large blue chip and manufacturing firms â€“ the â€œrealâ€ economy â€“ representing a further 60 per cent of global revenues.
When the team further untangled the web of ownership, it found much of it tracked back to a â€œsuper-entityâ€ of 147 even more tightly knit companies — all of their ownership was held by other members of the super-entity — that controlled 40 per cent of the total wealth in the network.
â€œIn effect, less than 1 per cent of the companies were able to control 40 per cent of the entire network,â€ says Glattfelder.
Most were financial institutions.
The top 20 included Barclays Bank, JPMorgan Chase & Co, and The Goldman Sachs Group.

Why does this shit sound so freakin’ familiar.