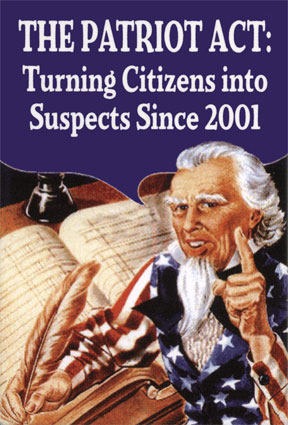 Another anniversary this morning, and a sad day indeed for US peoples.

Ten years ago today, George Jr. signed into law the infamous USA/Patriot Act, a move which revealed the end game for the great American experiment in democracy — nowadays the US is closer to George Orwell than George Washington.

And although George Jr. originally started it, the supposedly big change-master, President Obama, has signed re-authorization bills three times during his tenure so far, and has continually pushed not for transparency in government (as he campaigned), but if documents requested by the public are exempt from freedom of information laws, federal agencies should be able to “respond to the request as if the excluded records did not exist.”

Pretty-much everyone knows the Act is shitty (except the government).
In 2007, two parts of the Patriot Act was found to be unconstitutional: Search and intelligence gathering was a bit too much.
From CNN four years ago:

“It is critical that we, as a democratic nation, pay close attention to traditional Fourth Amendment principles,” wrote Judge Ann Aiken of the U.S. District Court for the District of Oregon in her 44-page decision.
“The Fourth Amendment has served this nation well for 220 years, through many other perils.”

The case came from a lawsuit filed by Brandon Mayfield, an Oregon lawyer thought to be involved in the 2004 Madrid train bombings — wrong!

The federal government later apologized to Mayfield and settled part of Mayfield’s lawsuit for $2 million. But Mayfield was permitted to keep pursuing the portions of his lawsuit challenging the constitutionality of the Patriot Act.
Mayfield claimed in the suit that his home and law offices were secretly broken into by the FBI, his clients’ files at his office were searched, his business and personal computers were secretly copied, his telephone was wiretapped and his home was bugged.
Mayfield said he was “excited and happy” with the ruling.
“This, to me, is not so much personal,” he said.
“I think it’s just the right thing to do.
It was the right thing to continue to challenge the constitutionality of the Patriot Act.”

And to be even more nasty, Nicholas Merrill, in a piece in the Washington Post yesterday, wrote of the actual, nefarious operation of the Patriot Act, and how if left alone, the US government will greatly f*ck over each and every US person without blinking an all-seeing eye.
Merrill, an owner of a small Internet provider, described the FBI seeking information on one of his clients in 2004, and (this is the big-ludicrous part) he was totally forbidden from telling “any person” the G-men had even contacted him.
Instead, to his credit, Merrill went to the ALCU.
He reflects now:

A decade later, much of the governmentâ€™s surveillance policy remains shrouded in secrecy, making it impossible for the American public to engage in a meaningful debate on the effectiveness or wisdom of various practices.
The government has used NSLs to collect private information on hundreds of thousands of people.
I am the only person from the telecommunications industry who received one to ever challenge in court the legality of the warrantless NSL searches and the associated gag order and to be subsequently (partially) un-gagged.
…
For years, the government implausibly claimed that if I were able to identify myself as the plaintiff in the case, irreparable damage to national security would result.
But I did not believe then, nor do I believe now, that the FBIâ€™s gag order was motivated by legitimate national security concerns.
It was motivated by a desire to insulate the FBI from public criticism and oversight.

The standard bullshit line — damage to national security.
Hey, kiss the ass of all US peoples.

Then absolutely no one should be surprised atÂ the latest New York Times/CBS News poll: Not only do 89 percent of Americans say they distrust government to do the right thing, but 74 percent say the country is on the wrong track and 84 percent disapprove of Congress â€” warnings for Democrats and Republicans alike.

Hard to believe, huh?
Nearly 90 percent of US peoples don’t trust Washington, DC — of course, the economy is the front-burner pot on fire, but in the back of everybody’s mind is that even if you’re unemployed and your home is underwater, youÂ  still need to be watched just in case you go crazy and run off to join al-Qaeda.
Crazed all over.

And what did the most-wonderful Patriot Act actually help do?
Nothing less than create a humongous intelligence-gathering apparatus, which turned out to be completely incompetent — a more than $2 trillion waste.
In a Washington Post review of the book, “Top Secret America: The Rise of the New American Security State,” by Dana Priest and William M. Arkin, comes this bottom line view: If a large chunk of the federal government is disappearing down a black hole, that hole leaks. In this, as in many other instances supplied by Priest and Arkin, â€œone of the greatest secrets of Top Secret America is its disturbing dysfunction.â€

In line with all this shit..
Much, much more of this ‘national security’ crap — from allgov.com:

Established by Congress to investigate and expose government waste, the Commission on Wartime Contracting in Iraq and Afghanistan has decided to not reveal its volumes of materials to the public for another two decades.
After three years of work, the commission officially shut down last week, having concluded that the U.S. misspent between $31 billion and $60 billion in contracting for services in Iraq and Afghanistan.
But it wonâ€™t allow its records to be opened for public review at the National Archives until 2031, because some of the documents contain â€œsensitive information,â€ according to one official.
Steven Aftergood, an expert on government secrecy at the Federation of American Scientists, told The Wall Street Journal that the 20-year term â€œseems like a long period of time, particularly for a commission whose whole purpose is to improve accountability and expose waste.â€

In the shadow: “Sanity is not statistical.”