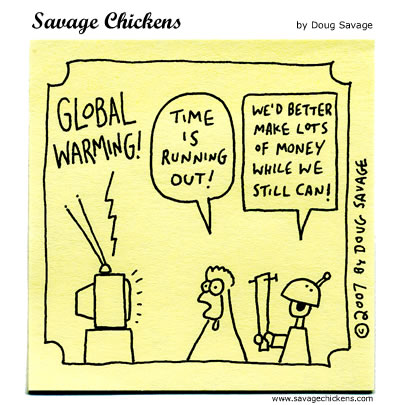 In facing the greatest threat to humanity, maybe in all of recorded history, Americans still can’t decide whether they should give a shit or not on climate change.
The latest Gallup poll revealed 53 percent of US peoples see global warming as a very or somewhat serious threat, down 10 percent from two years earlier — “We have got a big problem, domestically, in terms of climate reality,” said Alden Meyer, director of strategy and policy at the Union of Concerned Scientists.

Christiana Figueres, the UN’s chief for managing climate talks, considers the US a way-dangerous slacker, and could lead the planet into destruction.
Via Climate Progress:

â€œThe U.S. is hamstrung.
And I wonder how long itâ€™s going to take the U.S. civil society â€¦ to realize that climate change is affecting them directly — itâ€™s not just affecting somebody else.
I really think the â€¦ U.S. population needs to understand that this is not just their historical responsibility, but this is their future that theyâ€™re compromising.
And when that awareness is raised, then I think the government will make more ambitious decisions.
I think thereâ€™s no public pressure in the United States to take any more ambitious decision.â€

And the woman is most-passionate about the coming climate calamity.
Last year, Figueres nearly broke down and wept while addressing some young people during the Cancun climate talks: “The fact is, Iâ€™m the mother of two women about your age, and I realized many years ago that I had inherited a planet that was a diminished planet. And that if I didnâ€™t do something about it, my daughters would grow up in a planet that had been severely diminished by what weâ€™re doing. And I just canâ€™t look at my daughters in the eyes and not do whatever I can.”

Yes, ‘whatever I can,’ not to be confused, of course, with the infamous failed, ‘Yes, We Can.’

The major problem in the US is loud-mouthed assholes.
One big dip shit is Sen. James Inhofe, the Oklahoma climate-change denier who is so f*cked he can’t see his own state boiling in its own juices.
Even after stating in 2003 global warming “the greatest hoax ever,” Inhofe now claims he’s “doing the Lord’s work” in fighting this massive falsehood.
Talk about one hypocritical sonofabitch.

And these assholes are in it for the cash.
From The Atlantic yesterday:

Republicans have long had close financial ties to the fossil-fuel industry, of course.
Between 1998 and 2010, the oil-and-gas industry gave 75 percent of its $284 million in political contributions to Republicans.
But the 2010 Supreme Court decision in Citizens United v. Federal Election Commission, which allowed unlimited corporate spending on campaign advertisements, opened up a whole new avenue for interest groups to influence campaigns by flooding the airwaves with ads that support a political candidate or position.
In the 2010 elections alone, the top five conservative and pro-industry outside groups and political action committeesâ€”including the U.S. Chamber of Commerce and the Karl Rove-backed PAC American Crossroads, which have close ties to fossil-fuel interestsâ€”spent a combined $105 million to support GOP candidates (compared with a combined $8 million that the top five environmental groups spent to back Democrats).
Both sides could double those numbers in 2012.

Humans are stupid, irrational and playing mind games: Our speciesâ€™ irrational side adds to the genuine, inescapable complexities of forging sound climate policies. But I suspect the more immediate obstacle to climate progress isnâ€™t cultural cognition so much as it is political cowardice.

All this shit on the heels of two different studies, one last month, the other just this week, which reveal worldwide ‘emissions of carbon dioxide from fossil-fuel burning jumped by the largest amount on record‘ in 2010.

Time keeps moving right along, which is something the planet can’t handle.
One must keep in mind that all these scientific papers, studies, surveys and whatnot show bad shit coming, but yet all this supposed knowledge is still limited most-likely by what’s called ‘educated guesses,’ though on a most-advanced level, thus, no one truly understands how fast this shit is traveling.
The concept, “abrupt climate change” has been banged about, but no one seem to know what tipping point will set-off domino-like, chain reactions where the whole shebang goes pop real quick.

In that case, time is so a-wasting and gotta make more money — the lottery, maybe.