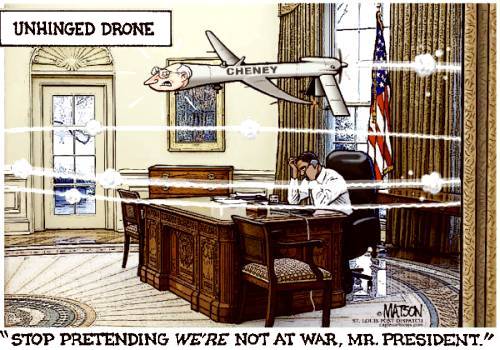 The US drone war is the one conflict that’s always continually escalating — even as the US vacates an isolated Pakistani base from where UAV aircraft were launched will apparently not slow the operations down at all.
From Wired: The CIA just got kicked out of a major Pakistani launching pad for the drone war. But just because the agency is packing up its stuff like a dumped lover doesnâ€™t mean the deadly flying robots will head home. Theyâ€™ll just move to the airbases in nearby Afghanistan. Consider it the drone equivalent of crashing on a friendâ€™s couch for a while.
These machines don’t need no introduction.

And this is the future.
George Jr. started the program, but President Obama has most-definitely put his mark on it.
There were about 30 strikes on Pakistan during Obama’s first year in office, up from about 13 strikes between 2004 and 2007 and in 2009, about 54 attacks, all also in Pakistan.
Last year, the war expanded to include Yemen, and a total of 122 strikes.
In 2011, there have been 81 strikes in Pakistan, Somalia and Yemen combined — of course, there’s still Afghanistan, Iraq or Libya, where hot ‘legal‘ wars are being conducted.

Although there’s been a lot of news about drones, last week, Iran got their hands on a piece of US equipment in the form of a RQ-170 Sentinel, when it was somehow downed inside Iranian territory.
And despite Obama formally asking for the craft’s return, Iran says no way jose, considering the Sentinel “war booty.”
From Time this morning:

“Their plane invaded Iran and Iranian forces reacted powerfully,” said Defense Minister Gen. Ahmad Vahidi
“Now, instead of offering an apology to the Iranian nation, they impudently ask for the return of the plane.”
…
Vahidi said the United States should apologize for invading Iranian air space instead of asking for drone back.
“Iran will defend its stance and interests strongly,” Vahidi said in remarks carried by the semi-official Mehr news agency.

Some US officials say Iran won’t get much out of the captured drone, but Russia and China might as both are accustomed to copying military hardware from other countries and the innards of the Sentinel should have ant-tamper measures: At least, itâ€™s supposed to, according to the Boeing engineer. â€œDumbest thing in the world if it didnâ€™t.â€

Another brick in the wall in the nasty Iranian dust-up.

And now another big opinion in the ways of the war world: Richard ‘The Dick‘ Cheney says Obama is acting like a baby and he should man-up to the Iranians — in an interview with CNN on Monday, The Dick claimed Obama should have ordered an airstrike toÂ  destroy the downed Sentinel.
Via Press TV: “The right response to that would have been to go in immediately after it had gone down and destroy it,” Cheney said, adding, “You can do that from the air. You can do that with a quick air strike.â€
If your bowels are strong enough, view the CNN interview here.

Use of drones is really most indiscriminate and the US should be ashamed of how these machines kill without remorse and without human feelings.
See the horror of the aftermath of drone attacks here.

“…it is a cheap way to fight, and does not endanger any American lives.
“It is popular on Capital Hill because it appears to be having success and the military has got to come up with something, or the CIA saying â€˜we are killing militantsâ€™ and filling a body-count list.
But there is a danger here, and that is what American intelligence professionals have been rightly saying for sometime: As the CIA becomes more and more militarized, it is losing its primary mission, which is to provide intelligence and information on an unbiased basisâ€¦ it is now a participant [in the USâ€™s wars], and its decisions and information will be biased as a result.â€ 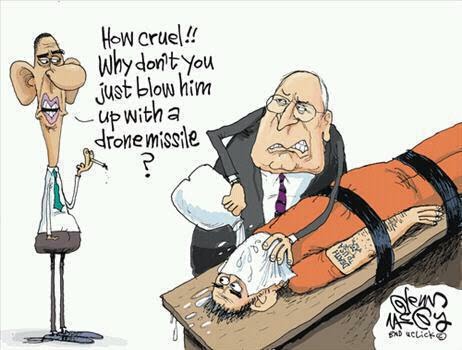