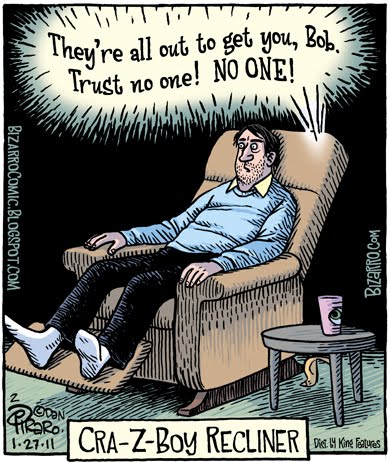 Woke up this morning with a streak of depression frosted by some crazy swirls — politics and reality makes one way-nuttier-than-a-fruitcake.
Pieces of 2012 floating with the flotsam.

Like dumb-asses — Suzy Welch, wife of 1 percenter former GE head honcho Jack Welch, on the wonder of Mit Romney: “People look at him and think it must be phony – that affect can’t be real,” she said. “Nobody looks like that, has that beautiful family. There’s something we’re not seeing. This is the ‘Jersey Shore’ culture. He’s too good to be true.”

Yes — and meanwhile, Charlie Sheen compliments himself: “I’m not crazy anymore. That was an episode,” Sheen says, laughing, as he spoke with reporters at Sunday night’s Fox Network Television Critics Association party in Pasadena, Calif. “I think I’m a different person than I was yesterday. Everything is a lot more mellow and focused and much more rooted in reality.”
And surprise, surprise: Rapper Snoop Dogg was arrested over the weekend after border control agents found what they said was a small amount of marijuana on his tour bus.
What?
Me crazy?

Mississippi Governor Haley Barbour pardoned four convicted murderers who worked at the Governorâ€™s Mansion, releasing them from prison in the final days of his term in office, state officials said on Monday.
In all, Barbour pardoned four men convicted of murder and another convicted of burglary and robbery, all serving life sentences.
In the executive orders Barbour signed, he wrote each â€œproved to be a diligent and dedicated workman.â€

That’s nice.
And again for no apparent motive:

A Polish prosecutor involved in investigating the plane crash that killed former President Lech Kaczynski and many members of his government not far from the infamous Katyn forest has shot himself for no clear reason during a media briefing.
Prosecutor Mikolaj Przybyl asked journalists to clear the room during a press conference, claiming he needed â€œa break.â€ Moments later they heard a gunshot, and returned to the room only to find Przybyl on the floor in a pool of blood, his gun by his side.

Pure crazy morning here in California, feels like it’s crazy all over the world.