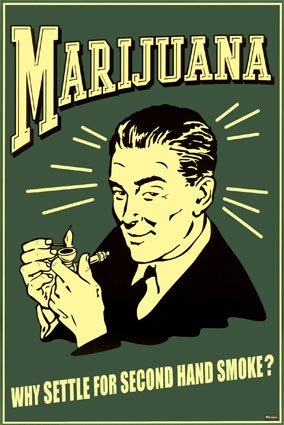 In an era of supposed enlightenment, marijuana still remains on the fringe — Dude, that needs to change.

Newt Gingrich, however, does appear even worse after a couple of tokes — some changes require way more.

Pot is the weaker sister — the big headline in this story was marijuana, but alas…

A Rhode Island lawmaker is due in court following his second arrest on marijuana possession charges.
…
Police say they found marijuana and a smoking pipe in Watson’s vehicle, along with an opened beer can and two unopened beer bottles.

Smoke gets blamed for shit that just ain’t so.

Living in the very midst of the pot-growing center of the universe makes a discussion about marijuana as dumb as a stump — pack that in your pipe and draw hard.
The discovery of weed in the mid-1970s was the second greatest single event in my life, changing attitudes, outlooks and how life actually works — no, this ain’t Kansas no more.
Marijuana is not the evil, the bad guys are those who not only don’t smoke, but hate those who do and wish horrible things upon smokers are the culprit — marijuana needs legalization.
And a good chunk of US peoples feel the same.
From CBS:

President Obama’s live, online chat slated for Monday afternoon is intended to focus on issues raised during last week’s State of the Union address — but his online audience seems to be much more interested in marijuana policy.
…
Sorting the questions by popularity reveals that 18 of the 20 most popular questions, according to YouTube, have something to do with marijuana policy, including the legalization of marijuana use, the cost of the war on drugs and other related issues.
Questions about marijuana policy have dominated multiple online engagement efforts from the Obama White House.
In fact, the second-most popular question for today’s “hangout” comes from a retired police officer with the group Law Enforcement Against Prohibition (LEAP) — just as it did in Mr. Obama’s 2011 YouTube chat.

And from Slate: In 1969, 12 percent of Americans thought pot should be legal. That percentage grew to the mid-20s by the late 1970s, passed 30 percent in 2000, and hit 40 percent in 2009, according to Gallup. A surprising October poll showed support at 50 percent, with just 46 percent against.
Lawmakers and other nefarious types are not paying attention, however.

Here in California, aÂ ballot-box vote is on tap this November.
And about time:

A recent poll reveals that California voters, by a 62% to 35% margin, with 3% unsure, support a ballot initiative to regulate marijuana like wine.
…
Voters in California will have an opportunity to take that new approach this November with the Regulate Marijuana Like Wine Act of 2012 (RMLW), which will allow the state to regulate and tax marijuana and hemp.
The California Attorney General has projected â€œsavings of potentially several tens of millions of dollars annually to state and local governments of the costs of incarcerating and supervising certain marijuana offenders,â€ as well as potentially generating “hundreds of millions of dollars in net additional tax revenues related to the production and sale of marijuana products.”

Law enforcement buys it, too.
And why don’t you?