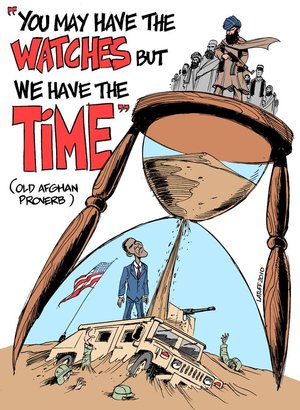 In all the bullshit noise this past week — even from yesterday’s ‘secular high holy day‘ along with the Three-Ring-Three-Stooges GOP political antics — there’s still folks dying in Afghanistan.
A war now beyond the decade limit, and from all indications, going really, really bad.

AnÂ example of the dumb-ass futility of it all: An American soldier shot and killed an Afghan guard at a base in the countryâ€™s north, apparently because the American thought the guard was about to attack him, Afghan police said on Sunday.

This war is so messed up, allies are shooting each other — the US GI’s trigger finger was in response to the Afghan military/police people killing NATO troops.

Last month, an Afghan soldier shot and killed four unarmed French troopsÂ  at a base in eastern Afghanistan, and the whole war operation is worse than deadly.
Civilian deaths increased again in 2011 — up 8 percent from 2010, which saw 2,790 deaths, and an increase of 25 percent from 2009, when 2,412 civilians were killed.
From McClatchy on Saturday:

Mir Ahmad Joyenda, deputy director of the Kabul-based Afghan Research and Evaluation Unit, and a former member of Parliament, said the rise in civilian deaths reported by the U.N. was a reminder that ordinary Afghans were at risk of violence “from morning to night.”
“Nobody’s safe, nobody’s secure,” said Joyenda. “Everyone is suffering.”

And now one US solider has opened up something closer to the truth.
Lt. Col Daniel L. Davis has described a reality on the ground considerably inconsistent with the official statements the military presents to political leadership or the American public (via antiwar.com).
Davis posted a document with Armed Forces Journal on his observations on the reality of the other side of the Afghan war.
A few snips:

I saw the incredible difficulties any military force would have to pacify even a single area of any of those provinces; I heard many stories of how insurgents controlled virtually every piece of land beyond eyeshot of a U.S. or International Security Assistance Force (ISAF) base.
I saw little to no evidence the local governments were able to provide for the basic needs of the people.
Some of the Afghan civilians I talked with said the people didnâ€™t want to be connected to a predatory or incapable local government.
From time to time, I observed Afghan Security forces collude with the insurgency.
…
On a patrol to the northernmost U.S. position in eastern Afghanistan, we arrived at an Afghan National Police (ANP) station that had reported being attacked by the Taliban 2Â½ hours earlier.
Through the interpreter, I asked the police captain where the attack had originated, and he pointed to the side of a nearby mountain.
â€œWhat are your normal procedures in situations like these?â€ I asked.
â€œDo you form up a squad and go after them?
Do you periodically send out harassing patrols?
What do you do?â€
As the interpreter conveyed my questions, the captainâ€™s head wheeled around, looking first at the interpreter and turning to me with an incredulous expression.
Then he laughed.
â€œNo! We donâ€™t go after them,â€ he said. â€œThat would be dangerous!â€
According to the cavalry troopers, the Afghan policemen rarely leave the cover of the checkpoints.
In that part of the province, the Taliban literally run free.
…
To a man, the U.S. officers in that unit told me they had nothing but contempt for the Afghan troops in their area â€” and that was before the above incident occurred.
In August, I went on a dismounted patrol with troops in the Panjwai district of Kandahar province.
Several troops from the unit had recently been killed in action, one of whom was a very popular and experienced soldier.
One of the unitâ€™s senior officers rhetorically asked me, â€œHow do I look these men in the eye and ask them to go out day after day on these missions? Whatâ€™s harder: How do I look [my soldierâ€™s] wife in the eye when I get back and tell her that her husband died for something meaningful?
How do I do that?â€
One of the senior enlisted leaders added, â€œGuys are saying, â€˜I hope I live so I can at least get home to R&R leave before I get it,â€™ or â€˜I hope I only lose a foot.â€™
Sometimes they even say which limb it might be: â€˜Maybe itâ€™ll only be my left foot.â€™
They donâ€™t have a lot of confidence that the leadership two levels up really understands what theyâ€™re living here, what the situation really is.â€
…
If Americans were able to compare the public statements many of our leaders have made with classified data, this credibility gulf would be immediately observable.
Naturally, I am not authorized to divulge classified material to the public.
But I am legally able to share it with members of Congress.
I have accordingly provided a much fuller accounting in a classified report to several members of Congress, both Democrats and Republicans, senators and House members.

Read the whole post — might piss you off.
Also read the New York Times story on Davis.

And this reader’s comment from another NYT piece on Davis highlights the historical significance of the US military’s continued amnesia:

Those of us who are old enough remember General Westmoreland’s glowing reports on progress in Vietnam right up until we airlifted people out of Saigon by helicopter.