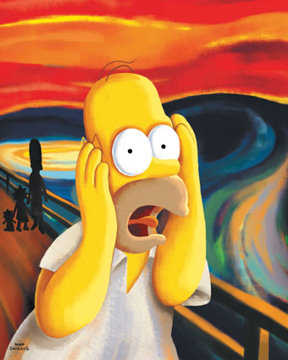 In the dawn of a Republican keg party of nonsense, a shitload of delusional US peoples will take to the ballot box in 10 states and try to separate the horribly bad from just the plain, dumb bad.
Super Tuesday they want to call it.

Except them Republican voters are staying home — so far the turnout for the primaries has been a terrible wash.
(Among some bad numbers — down 69 percent in Missouri, 72 percent in Nevada, 77 percent in Minnesota, and 86 percent in Maine): Those numbers don’t bode well for the nominee or the party, no matter how much fuzzy math they use come November.

A crazy recognizes a crazy, I guess.

And the whole batshit-crazy approach of the entire GOP presidential line-up was typified by total screw-loose Rick Santorum on how the wealthy should be left alone — they’re special:

And to re-inforce the moneyed message, this yesterday from Mitt’s old lady, Ann: â€œWe can be poor in spirit, and I donâ€™t even consider myself wealthy, which is an interesting thing, it can be here today and gone tomorrow,â€ she said.
These guys made $21.7 million in 2010, $20.9 million last year and are worth $250 million overall — and displays the vast gulf between pretend reality and real reality when someone with those numbers could even venture up the thought, much less actually speak the words, ‘I don’t even consider myself wealthy.’

The US is in real, real bad shape.

Well, the whole globe is in pretty bad shape, but it’s the awesome hypocrisy that separates the US from the rest of the flock — 1 percent runs the whole show and will always be in control.
And they’re all assholes.

Andrew Breitbart died suddenly last week — he was a liar and a twister of truth and although it’s way-terrible to just drop dead like that, he wasn’t a shining light in the wilderness.

So, to shine the faded light on the subject, the female version of Rush Limbaugh once again illustrated how delusional an entire bunch of US peoples.
Ann Coulter slipped the bounds of mental gravity lamenting the death of the pathetic Breitbart– via Raw Story:

â€œHe did so much for the conservative movement,â€ she explained.
â€œWho knows what else he could have done.
Itâ€™s like John Lennon dying.
What other music might he have produced?â€
â€œThough he did leave us with a lot of music and so did Andrew Breitbart, from the Drudge Report and I actually think The Huffington Post does a lot of good for our side because we get to see what lunatics have to say. â€¦ So, I do think itâ€™s a huge loss but he left us with a lot.â€

This the same sweet thing that slapped at women made widows by Sept. 11, 2001: “I’ve never seen people enjoying their husbands’ deaths so much.”

And so it goes — Welcome to Tuesday.