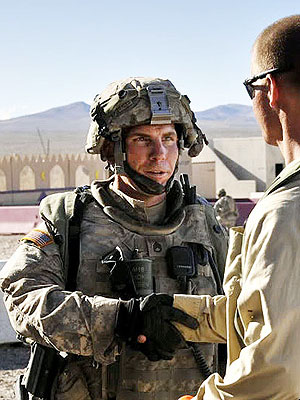 Although the name of the supposedly “lone service member” who killed 16 Afghan civilians a week ago has finally emerged — Sgt. Bob Bales — the names of the victims of the rampage haven’t seen the light of day.
As Paul Woodward wrote at War In Context, the reason: Because they are not Americans.

These asshole conflicts in the name of national security are the purest of bullshit, creating “conditions of atrocity,” where US GIs are place in an ethical and moral quagmire like that long-ago horror of Vietnam’s “free fire zones” in which anybody/anything can be gunned down.

Iraq was a horror and Afghanistan could get even worse, but I really don’t see how — the killing will never stop and the US — George Jr. and company — are greatly to blame.

From the UK’s the Guardian last week:

The nature of these occupations fosters atrocity.
The invented enemy, the lack of a battlefield void of civilians, the supposed moral superiority of the occupiers, the obscure goals of the mission, the methods of training that prepare soldiers for occupation, and the methods of warfare all make the murder of civilians unavoidable.
In modern warfare, 90 percent of the casualties are civilian, but this is a reality that the west likes to ignore.

The writer, Ross Caputi, is a former US Marine who served in Iraq — he continues further in the piece:

We often toyed with the ideas of suicide and homicide, and joked about them.
We laughed at the possibilities that someday, we might end up homeless on the streets, or shooting bystanders from a bell tower somewhere.
We knew these possibilities were real, and we were frightened by them.
“Ah, the glory of it all,” we laughed.
It was dark humor that made the dark reality that many of us really were on the verge of killing ourselves or someone else easier to bear.
However, in occupied territory, violence that might otherwise be turned inwards, sometimes gets expressed outwards.
In Fallujah, I witnessed all our frustrations, our loneliness, our grief, our confusion, hate, fear and rage being unleashed on Fallujah — and Fallujans paid dearly.
I witnessed good people do horrible things.
Almost anyone in such a situation would have become just as ruthless.
Some of my closest friends mutilated dead bodies, looted from the pockets of dead resistance fighters, destroyed homes, and killed civilians.

Considering the current situation on the ground in Afghanistan, life in that war zone can’t continue as before — business as usual — and the very reason for the US being there is so long gone it’s ludicrous.
President Obama tossed out some foot-stomping bullshit two years ago when he ordered an Afghan “surge,” and though claiming the whole aim of the conflict was to “disrupt, dismantle and ultimately defeat Al-Qaeda” — Obama’s National Security Adviser, Gen. James Jones, put the number at “fewer than a hundred” in an October interview with CNN.
How many are there now?
Supposedly, not hardly any — from The Nation: According to a Defense Department spokesman, the most recent operation that killed an Al Qaeda fighter was in April 2011â€”ten months ago. However, there was an â€œAl Qaeda foreign fighterâ€ captured near Kabul in May 2011, and an â€œAl Qaeda facilitatorâ€ captured in the Paktiya province on January 30 of this year.
Osama’s dead and his boys have gone elsewhere — so what the freak are we doing there?

Maybe not for too much longer, however.
Afghan President Hamid Karzai has demanded US troops withdraw from villages and return to their bases, saying relations between the two countries were “at the end of their rope” because of the massacre.
The Afghan investigation claims there were also more than just one guy, a whole team took part in the killings.
Although initial reports did indicate a bunch of GIs — see Sky News — the official US line is that only Bales committed the slaughter.

And this whole affair could rattle the US scenario.
Retired Maj. Gen. James A. “Spider” Marks, a former commander of the U.S. Army Intelligence Center, told CNN yesterday:

“Our commanders on the ground will determine that probably within about another week.
Within a couple of weeks, it would not be unusual if there has not been a change in our posture inside those bases, that you can see forces coming back.
It’s not inconceivable that that could happen.”

Don’t count on it, though.
The US has a dumb-ass history of staying way-too-long anywhere.