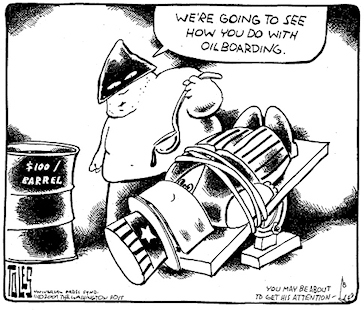 Once again, a glance at the nasty-sticky, slimy world of oil as nit-twits-in-charge discuss unleashing reserves — yesterday, the French claimed they’re considering a release of emergency stockpiles to bring down oil prices.
Won’t change the pump price, though.

A song way-along in changing.
These high gas-pump prices will attempt to derail the so-called (though, way-fragile) recovery: The average price for regular gasoline at U.S. filling stations increased 11.49 cents to $3.9297 a gallon, according to Lundberg Survey Inc.
The price jump covers the two-week period ended March 23 and is based on the Camarillo, California-based companyâ€™s survey of about 2,500 stations. The price is almost 36 cents higher than a year earlier, when the average was $3.5726, the survey showed.
And the immediate future ain’t going to be pretty.

Richard Heinberg, author of “The End of Growth: Adapting to Our New Economic Reality,” told a college crowd this week in Albany, New York, that life right now is slowly-quickly passing away.

Heinberg’s vision imagines a future in which people are less mobile (given that oil fuels 95 percent of global transportation), more self-sufficient and more plugged into local communities for food, services and manufactured goods.
He said renewable fuels like wind and solar can make up for some of the absent fossil fuels, but those technologies are not currently able to replace a meaningful portion of that.
“This transition will be slow and costly … Our lifestyle will be negotiated downward, and a lot of it will be kicking and screaming,” he said.

Just four or five years ago, when I first started paying closer attention to the-then ‘concept’ of peak oil, this so-called peak wasn’t considered for another 20-30 years — off into 2030 or 2050 — and our modern civilization based entirely on the gushing crude had plenty of time to adjust.
Then a shift and 2015 was tossed out, then more discussion as the date was pushed farther and farther into the now.
And now, it happened yesterday (or seven years ago).

According to the scientific journal, Nature last January, oil peaked in 2005.
Some bits via Balloon Juice yesterday:

[…]We are not running out of oil, but we are running out of oil that can be produced easily and cheaply.
The US Energy Information Administration optimistically projects a 30 percent increase in oil production between now and 2030 (ref. 2).
All of that increase is in the form of unidentified projects — in other words, oil yet to be discovered.
Even if production at existing fields miraculously stopped declining, such an increase would require 22 million barrels per day of new oil production by 2030.
If realistic declines of 5% per year continue, we would need new fields yielding more than 64 million barrels per day — roughly equivalent to todayâ€™s total production. In our view, this is very unlikely to happen.
…
[…]Of the 11 recessions in the United States since the Second World War, 10, including the most recent, were preceded by a spike in oil prices.
It seems clear that it wasnâ€™t just the â€˜credit crunchâ€™ that triggered the 2008 recession, but the rarely-talked-about â€˜oil-price crunchâ€™ as well. High energy prices erode family budgets and act as a head wind against economic recovery.

Fill ‘er up, and clean the windhield.