Foggy, damp and more-than-cool this Wednesday evening on California’s north coast — sunshine busted through a bit in the early afternoon, but slowly the scenery went all fucking gray again. Seems like everything has gotten darker, the sky a  misty ash wet to the touch.
While on a mid-day dog run at Little River State Beach, we encountered mostly low-clouds and fog, but did experience a small sunshine break with blue skies and warmth — it was brief, though.

Maybe due to an influence of the weather, I haven’t posted for nearly two weeks, a time-frame of just about how long our area here has been been swamped by all-day heavy fog and low clouds. A weather pattern coming in suddenly after couple/three months of great sunshine and semi-high temperatures, and after a few days, causing a downer naturally.
Yet not just the freakin’ fog.
One could not imagine today’s world just four/five years ago. Beyond the clusterfuck/shitstorm that’s the T-Rump, seemingly the entire planet is coming apart at the seams, from political uprisings, wars, climate change, a load of action-creators worldwide. As a news addict, consuming events/places/people all day long, the sheer amount of activity is astounding, overwhelming,and I just want to read me some Diane Mott Davidson.
I write as I feel…

Today a perk-up — the House impeachment hearing appeared to have reflected a live-wire-negative on the T-Rump, and the whole Republican brand, and the graphic just below, a laugh-out-loud poke at the situation (h/t Digby): 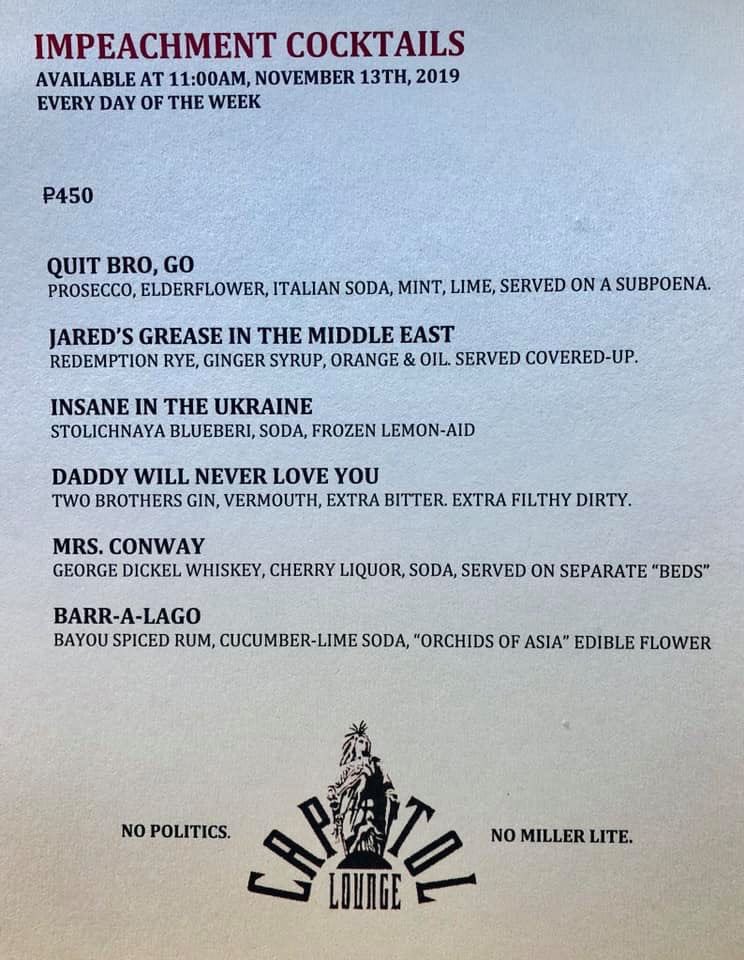 In sadness, there’s always a desire for smiling, maybe even laughing, and in that same golden vein, off the menu of crazy, another giggle offering on the impeachment hearing. Literary ingredients are stiff, super-sniff sarcasm and irony, sautéed with a dash of pseudo-histrionics  —  Devorah Blachor at McSweeney‘s this afternoon:

This impeachment is so confusing.
Both sides are making contradictory claims and it’s almost impossible to know who to trust.

On the one hand, you have George Kent, a career Foreign Service officer whose entire family served in the armed forces, including an uncle who was at Pearl Harbor and survived the Bataan Death March, and on the other hand, you have a bone spurs draft dodger whose dad got arrested at a KKK riot.

There’s this fellow Bill Taylor who served as a Captain and company commander in Vietnam and who was awarded a Bronze Star, but then again, Donald Trump’s first wife Ivana and numerous other women have said that he sexually assaulted them.
If only American politics weren’t so partisan, I might be able to make sense of it all, but I can’t.

At the hearing, I saw two serious, professional men who both served under Republican and Democrat administrations.
Yet just last week, President Trump was ordered to pay two million dollars for using charity funds to pay off his business debts and promote himself.
How can a voter like me be expected to know who is more credible?