(Added stuff below)
News this morning that one of the great assholes of our time (on the rock-face with Dick Cheney), damn-dumb Don Rumsfeld, will release his “autobiography” early next year and will tell the tale straight — as if the sonofabitch could say anything with a straight face.

“Like Donald Rumsfeld himself, this memoir pulls no punches,” said Adrian Zackheim, president and publisher of the Sentinel imprint of Penguin Group.
The book, titled “Known and Unknown,” will span the length of Rumsfeld’s life and explore some of the controversies such as the abuse of prisoners at the Abu Ghraib jail in Iraq and allegations of human rights violations at the U.S. military prison at Guantanamo Bay, Cuba, the publisher said.
The title is derived from comments made by Rumsfeld during a February 2002 news conference in which he referred to “known knowns” and “known unknowns.”
Rumsfeld had been asked by a journalist whether there was any evidence that Iraq had tried to supply terrorists with weapons of mass destruction.

The reality of the “known” is Rummy is a hard-hearted asshole.
AndÂ this press conference in December 2004 reveals the real known:

Q: Yes, Mr. Secretary.
Our soldiers have been fighting in Iraq for coming up on three years.
A lot of us are getting ready to move north relatively soon.
Our vehicles are not armored.
Weâ€™re digging pieces of rusted scrap metal and compromised ballistic glass thatâ€™s already been shot up, dropped, busted, picking the best out of this scrap to put on our vehicles to take into combat.
We do not have proper armament vehicles to carry with us north.
SEC. RUMSFELD: I talked to the General coming out here about the pace at which the vehicles are being armored.
They have been brought from all over the world, wherever theyâ€™re not needed, to a place here where they are needed.
Iâ€™m told that they are being — the Army is — I think itâ€™s something like 400 a month are being done.
And itâ€™s essentially a matter of physics.
It isnâ€™t a matter of money.
It isnâ€™t a matter on the part of the Army of desire. Itâ€™s a matter of production and capability of doing it.
As you know, you go to war with the Army you have.
Theyâ€™re not the Army you might want or wish to have at a later time.
Since the Iraq conflict began, the Army has been pressing ahead to produce the armor necessary at a rate that they believe — itâ€™s a greatly expanded rate from what existed previously, but a rate that they believe is the rate that is all that can be accomplished at this moment.

Because he didn’t give a shit.

(New added stuff in the PM)

And he’s been not-giving-shit a long time. 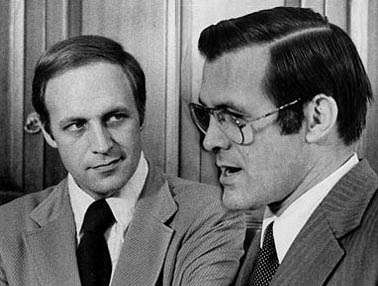 When I did the original post early this morning, and looking for some art to complement it (as art should), I saw this old, familiar photo to the left of Rummy and the Dick from about 1975.
Amazingly, these two clowns have been causing mischief nearly four decades.
And who’d figured during Gerald Ford’s one-shot presidency these guys would eventually create a nightmare, turn the entire Middle East into a nasty, more-violent, unsettled war zone and cause the deaths of thousands and thousands — longevity of always plotting in the shadows of the dark side.

Rumsfeld’s memoir is due in January; the UK’s Tony Blair has regurgitated his self-story already, “A Journey,” andÂ it created some not-so-happy receptions; and after the mid-term elections in November, George Jr.’s crayon-sketched, “Decision Points,” will be made public — three amigos without a known regret.