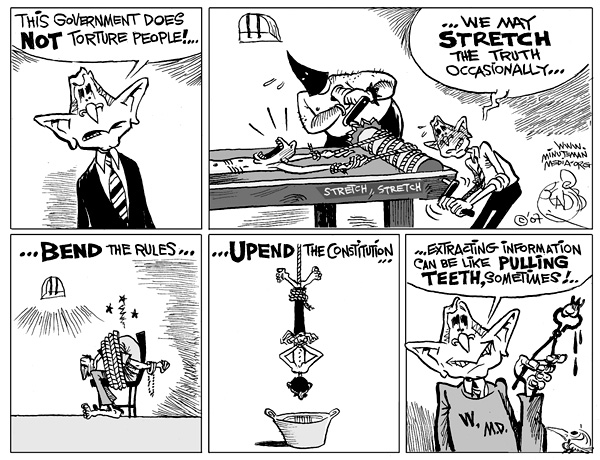 In all the documents dumped on the world’s people from WikiLeaks these past few months the ones painting the real ugly picture is the graphic displaying the US tendency to use torture methods — on anybody, anywhere, regardless of the situation.
And apparently condone it and look the other way when others attempt it, although it’s been proven over and over again these interrogation procedures don’t work.

Although the UK has has called for investigations into the reports of widespread torture within Iraq, most likely nothing will never come of it in the good, old US of A — Fox News even has called WikiLeaks to be labeled “enemy combatants” — as here across the pond we tend view torture as somebody else’s problem.

An editorial this morning in UK’s the Guardian:

Many attempts were made to justify the invasion of Iraq, but one of the most frequently and cynically used was that, irrespective of the absence of weapons of mass destruction, putting an end to the barbarities of Saddam Hussein’s regime was a moral imperative.
Well, now there is chapter and verse, from ringside seats, on the systematic use of torture by the Iraqi government that the US installed in Saddam’s place.
The worst practices of Saddam’s regime did not apparently die with him, and whereas numerous logs show members of the coalition making genuine attempts to stop torture in Iraqi custody, it is clear their efforts were both patchy and half-hearted.
In the worst incidents, one can only reasonably conclude that one set of torturers and thugs has been replaced by another.

If the news is horrible, the official line is to attack the source.
And the New York Times has once again walked the point.
Glenn Greenwald describes the whole shit in Nixon-era terms — shoot and/or smear the messenger.

Richard Nixon and his plumbers could have only dreamed about being able to dispatch journalists to dutifully smear whistle-blowers in this manner.
And all of that is totally independent of the lengthy discussion which Burns predictably includes of the unproven rape and harassment allegations against Assange.
Apparently, faced with hundreds of thousands of documents vividly highlighting stomach-turning war crimes and abuses — death squads and widespread torture and civilian slaughter all as part of a war he admired for years and which his newspaper did more than any other single media outlet to enable — John Burns and his NYT editors decided that the most pressing question from this leak is this: what’s Julian Assange really like?

And what is torture really like?
I’m sure a massive shitload worse than hearing “another brick in The Wall” even a hundred-billion times.