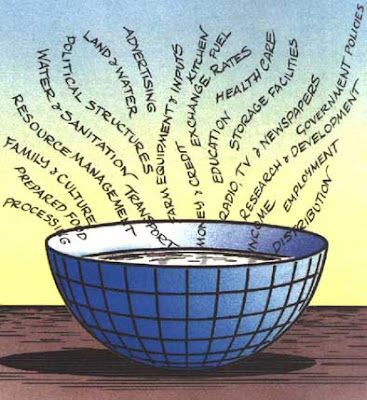 As the world watches revolutionary unrest spread across a big chunk of the Middle East, one of the most vital and festering problems leading the surge is eating — or not eating.
In 1996, The World Food Summit defined food security as existing â€œwhen all people at all times have access to sufficient, safe, nutritious food to maintain a healthy and active life.”
And one of the tenets for dictators is making sure the people have enough food — an element Tunisia’s Ben Ali seemingly forgot — Tunisia, of course, was the opening round of unrest that has now dominoedÂ (such a word?) across a shitload of unwieldy despotic countries where getting enough to eat has become a major problem.

As reflected by this observation Wednesday at Foreign Policy:

Even before President Mubarak’s decision to end his 30-year rule, Egypt’s crisis had earned the undivided attention of leaders across the Middle East.
King Abdullah of Jordan’s sacking of his cabinet and Yemeni President Ali Abdullah Saleh’s announcement that he too was not going to seek to extend his three-decade-long tenure in office indicated that both men recognized the fuse that was lit in North Africa was connected to stacks of dynamite on which they were sitting.

And that dynamite fuse is sparked by eating.

In Egypt, the worldâ€™s largest importer of wheat, a food subsidy program keeps the unwashed masses fed, but apparently higher food prices has caused a goodly part of the current unrest — a thin thread at best.
Abdolreza Abbassian, senior economist at the UN’s Food and Agriculture Organization (via Marketplace):

When food prices increase, you’re bound to be pouring fuel on the fire.
Egypt for example, prices of basic food have gone up 20 to 30 percent.
However, this country also happens to have quite a strong subsidy program where they target the most vulnerable.
And try to keep prices for that segment of the society rather stable. So that shouldn’t spark a big problem or discontent among that section of society.
…
I would be very doubtful that there would be any fundamental changes in the short run over the subsidy program.
Simply too many people depend on it.
It is strategic national security.
Therefore whoever is in charge would have to continue this program.
And I think without it, we could only see more agitation in Egypt.

The problem, however, doesn’t mean food shortage, it’s the very thought of paying higher and higher prices for that food.
Food riots can be a result of this anger about high prices.
From the UK’s Globe and Mail:

The political instability caused by this type of rioting — and the puzzle of figuring out how to stop it — has been a top priority for many global food policy experts since price spikes in 2008 set off violence in Haiti, Pakistan, Egypt and elsewhere.
Multiple factors play on the volatility of commodity markets.
Those range from climate change to improved diets in developing economies of China and India and the impact of seemingly unrelated hedge funds which buy up commodities to diversify their portfolios.
…
But hungry people — or people who fear theyâ€™ll go hungry — have fewer patience than theoretical economists.
Governments are well aware of this; many states have been more apt to intervene in markets to keep prices down.
Their rationale is that a satiated population will have less reason to protest.

And to make matters even worse: The Food Price Index of the UN’s Food and Agriculture Organization (FAO), which measures monthly price changes for a food basket of cereals, oilseeds, dairy, meat and sugar, hit a record in December, above a previous high set in June 2008 during the food crisis.
And the US hasn’t been effected yet — we’re still fat.

Time for a muffin and some chocolate milk — a bang-up great, modern all-American breakfast!