As the Japanese continue to struggle with a nightmare, raising the seriousness bar on Friday to what’s called Level 5 — same as Three Mile Island — we’ve discovered the possibility of more nefarious shit coming this weekend because of an extreme, whacked-out Super Moon.
Not only the tides, but the human brain will come under control of the lunar landscape staring at us at the closest point its been in nearly 20 years. 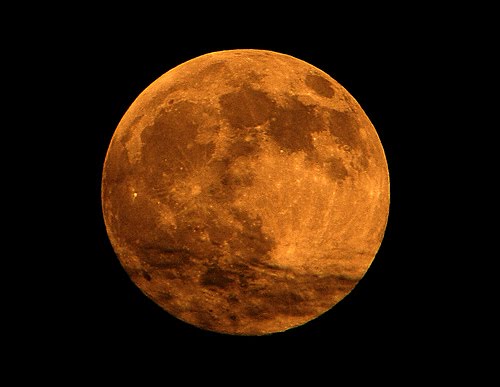 The moon will be at its fullest on Saturday and at its closest — about 221,567 miles vs its normal average range at about 238,000 miles.
And all this has opened a full can of foreboding worms that the moon will cause all kinds of bad shit to occur, like earthquakes, hurricanes, etc., which some have been shouting the end is near (might be) with even some saying the Japanese earthquake/tsunami was caused by the lunar object.
Bullshit say the scientists.
From the UK’s Independent:

The Super-Moon scare stories have flourished unchecked on the Web among a long list of conspiracy theories.
Phil Plait, writer of the Bad Astronomy blog (subtitle: “The universe is cool enough without making up crap about it”), aimed at debunking scientific myths, says attributing such powers to the moon makes no scientific sense.
“Think about it,” he says. “If there were some connection, and it were this obvious, geologists and seismologists would be issuing warnings every perigee and every full moon. These are people who have devoted their lives to understanding how the earth shakes, and would be screaming their heads off if it were something as easy and obvious as the moon.
They don’t because there’s no connection.”

If not the moon…?
Read an analysis of this “super moon” phenomenon here.

In northern California there won’t be much moon gazing this weekend — rain, hail, thunderstorms and more rain is in the forecast — and we will just have to take our chances.
And we know the illusion of the moonbeam: An Ebbinghaus Illusion, where the brain is fooled into believing what you think your eyes are seeing.
Now, that’s par for the course nowadays.