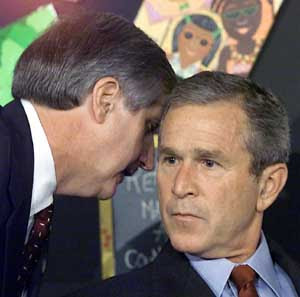 Watching the ceremonies this morning in New York is way sad — not just for the innocents killed today a decade ago and their families, but also for the naive, near-pompous nationalism inspired by the event.

The only ones entitled to really grieve are friends and relatives of the victims (to them, most-likely, everyday since is a small piece of any Sept. 11) — the rest of us should be near-out-of-control pissed at what’s happened since, which in its making, created an even greater grief.

Nine-eleven wouldn’t be considered such a singularly-sharp, nasty-edged and dramatic-tragic phenomenon if it hadn’t been thrown in the collective faces of US peoples near-continuous for now a decade — flag pins and flag waving, and a fear of everybody.
One event seems to have way-overshadowed 10 years of murderous, criminal behavior.

And I’m not the only asshole in the room that feels that way.
From a Time magazine commentary last Thursday:

Making the “war on terror” the centerpiece of the Bush Administration’s foreign policy allowed a marginal cluster of extremists, whose presence in America’s nightmares was infinitely greater than its presence on the Arab street, to effectively set the agenda of the most powerful nation on earth.
Al-Qaeda was a security menace in the West and the Muslim world (although effective police and intelligence cooperation since 9/11 has substantially diminished that threat), but as a strategic actor, it was insignificant.
It controlled no national territory, nor did it have the leverage to alter the prevailing balances of power.
…
Then presidential candidate Sen. John Kerry told the New York Times in October 2004, “We have to get back to the place we were, where terrorists are not the focus of our lives, but they’re a nuisance.”
Like organized crime, he argued, terrorism can’t be entirely eliminated, “but we’re going to reduce it… to a level where it isn’t on the rise.
It isn’t threatening people’s lives every day, and fundamentally, it’s something that you continue to fight, but it’s not threatening the fabric of your life.”
He was pilloried by the Bush Administration, of course, but in retrospect, he was stating what should have been obvious.
Instead, as former Clinton Administration trade official David J. Rothkopf recently noted, “We spoke of 9/11 as though it were somehow equivalent to Pearl Harbor, the beginning of a global war against enemies bent on, and at least theoretically capable of, destroying the American way of life (unlike al Qaeda, a ragtag band of extremists with limited punch).
We spoke of cultural wars and a divided world.
We reorganized our entire security establishment to go after a few thousand bad guys.
We went mad.”

And confirmed criminally-illegally-mad byÂ the very authority that makes the US a democratic republic: â€œThere is no question we all relied on flawed intelligence.Â But, there is a fundamental difference between relying on incorrect intelligence and deliberately painting a picture to the American people that you know is not fully accurate.”
And a lying, arrogant incompetence for creating a national disgrace for torture as a legitimate war tool: “The notion that somehow the United States was wildly torturing anybody is not true,” he said. “One of the most controversial techniques is waterboarding … Three people were waterboarded. Not dozens, not hundreds. Three. And the one who was subjected the most often to that was Khaled Sheikh Mohammed, and it produced phenomenal results for us.”
Not really — see this for the neuroscience on torture, and this for how it doesn’t provide real-value information, and this for how torture is illegal worldwide.

And the obvious is obvious.
This from a Brookings study released last week on public opinion about the 9/11 decade:

Six in ten Americans believe that that the United States weakened its economy by overspending in its responses to the 9/11 attacks.
In particular, respondents felt this was especially true of the U.S. mission in Iraq.
Two out of three Americans perceive that over the decade since 9/11, U.S. power and influence in the world has declined.
This view is highly correlated with the belief that the United States overspent in its post-9/11 response efforts — the wars in Iraq and Afghanistan.

And this continuing oddity:

Support for the decision to go to war is highly correlated with beliefs held by substantial and undiminishing minorities that Iraq was providing support to al Qaeda (46 percent) and either had a WMD program or actual WMDs (47 percent).
Among those with such beliefs, large majorities say the war was the right thing while among those without such beliefs large majorities have the opposite views.

Yet the sole perpetrator of all this shit and ugliness (in that ‘buck stops here‘ motif) is still considered legitimate.
This morning George Jr. spoke at the Ground Zero ceremony with President Obama and had the unmitigated gall to quote from an Abe Lincoln letter: â€œI pray that our Heavenly Father may assuage the anguish of your bereavement, and leave you only the cherished memory of the loved and lost, and the solemn pride that must be yours to have laid so costly a sacrifice upon the altar of freedom,â€ Lincoln wrote in the one passage quoted by Bush.

We wonder at the shape we find ourselves.