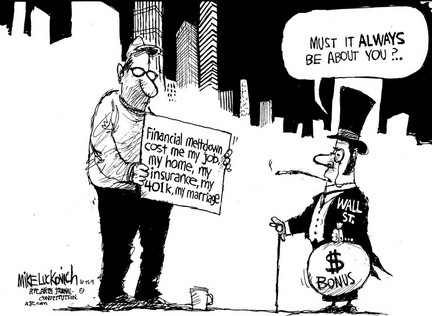 Last week, when Mitt Romney blubbered, “I’m not concerned about the very poor,” he later waddled back, claiming he “mispoke.”
In reality, the Mitt told the truth — if one has money, who gives a shit.

And cartoon-buffoon, mega-rich Don Trump on Monday silly-like claimed credit for Romney’s win in Nevada’s GOP caucus over the weekend — The Don is more than an 1 percent of a 99-percent asshole.
As the old saying — the rich get richer, the poor get poorer.

The wealthy GOP idiot’s race continues today with caucuses in Colorado and Minnesota with a full-blown primary in Missouri, but all these clowns have been doing for the last nine months is just blowing bullshit up the skirts of the huddled, despaired masses — bat-shit crazy Michele Bachmann, like bat-shit nutcase, The D, claimed “I was the perfect candidate.”
Not a one has any sense of compassion or care, and have been so well-to-do for so long they don’t have any clue whatsoever.

One good insight into this current most-ugly of inequalities came this past weekend from the New York Review of Books and research into four new books on the subject matter.
This nasty cash-flow process has been ongoing for decades and is even worse than supposed.
A few snips:

Imagine a giant vacuum cleaner looming over Americaâ€™s economy, drawing dollars from its bottom to its upper tiers.
Using US Census reports, I estimate that since 1985, the lower 60 percent of households have lost $4 trillion, most of which has ascended to the top 5 percent, including a growing tier now taking in $1 million or more each year.
Some of our founders foresaw this happening.
â€œSociety naturally divides itself,â€ Alexander Hamilton wrote in The Federalist, â€œinto the very few and the many.â€
His coauthor, James Madison, identified the cause.
â€œUnequal faculties of acquiring property,â€ he said, inhere in every human grouping.
If affluence results from inner aptitudes, it might seem futile to try reining in the rich.
…
Yet they seem to have America mainly in mind when they remark that â€œinstead of a better society, the only thing almost everyone strives for is to better their own position.â€
Here too weâ€™re into hyperbole.
The United States has a large stratum of professionals who choose public service careers; indeed much, even most, of the middle class doesnâ€™t set its sights on more than routine personal advancement.
Still, itâ€™s appropriate to ask how many of the rich care about creating a â€œbetter society.â€
Wealth brings higher-quality health care, private schooling, and personal pension plans, along with shielding from lines, crowds, and captious service.
…
As can be seen in Table A, in 1972, altogether 22,887 tax returns were filed with todayâ€™s equivalent of $1 million in income.
By 1985, the number had expanded to 58,603.
And in 2009, the most recent year for figures, this bracket had multiplied to 236,893.
In 1972, for every $1 million household there were 3,393 earning less.
Now for every $1 million household there are only 591 with less.
True, the population has grown since 1972, as has the overall income pool.
But not nearly enough to explain the expansion at the top.
…
If the Republicans win the presidency, it will be largely with votes from the upper half of the electorate, which provided their needed margin in the 2010 contests.
Using this base, the GOP claims that the rich must be cosseted because they are â€œjob creators.â€

A good read, but such bullshit — it will make one more pissed.
Unequal pissed.