In the 1965 movie, ‘Harlow,’ was the first time I’d heard the aspirin between the knees routine when the bombshell actress (played by bombshell Carroll Baker) first arrived in Hollywood and wondered how to survive.
Paraphrasing, as I can’t locate a screenplay anywhere online, she asks some slimy producer, who responds with a nasty smile, “Aspirin.”
Harlow kind of goes, “Huh?” Or words to that effect.
Another nasty smile — “Take an aspirin, and hold it tight between your knees.”

In high school when I saw that terrible movie, don’t remember any of it except that little exchange near the beginning, and for some unknown reason, took the whole sequence as very suggestive, and much-image producing, but had never really thought about it until this week.

Slimy assholes are the same down through the ages.
The most-ludicrous, and one-sided debates in recent memory is the current foam-blather over birth control — even maybe one of the most-nefarious institutions around nowadays (with a warped, cruel 2,000-year history), the Catholic Church, has weighted in talking out of their hypocritical ass about it.
Dumbest yet, however, came from Foster Friess, the mega-wealthy shithead who’s been keeping Rick Santorum alive in the GOP presidential sweepstakes.
Friess vomited up this shit yesterday talking with MSNBCâ€™s Andrea Mitchell– from TPM:

Mitchell: Do you have any concerns about some of his comments on social issues, contraception, about women in combat, and whether that would hurt his general election campaign would he be the nominee?
Friess: I get such a chuckle when these things come out.
Here we have millions of our fellow Americans unemployed, we have jihadist camps being set up in Latin America, which Rick has been warning about, and people seem to be so preoccupied with sex.
I think it says something about our culture.
We maybe need a massive therapy session so we can concentrate on what the real issues are.
And this contraceptive thing, my gosh, itâ€™s such inexpensive.
Back in my day, they used Bayer aspirin for contraceptives.
The gals put it between their knees and it wasnâ€™t that costly.
Mitchell: Excuse me, Iâ€™m just trying to catch my breath from that, Mr. Friess, frankly.

Frankly, Andrea, you should have first kicked or punched funny-guy Foster right-square in the balls.
He’d then have to eat some aspirin product by the handfuls.
What a horribly-humongous asshole.

Of course, it runs in the family, or in this case, the party.

Also yesterday, the US House Oversight Committee was supposed to hold a hearing on the whole President Obama/contraceptive blather, but the committee chair, Darrell Issa, forbade females from testifying.
Issa, a self-centered, nit-twit Republican, claimed females weren’t needed.
Via Think Progress, Issa blubbered: â€œAs the hearing is not about reproductive rights and contraception but instead about the Administrationâ€™s actions as they relate to freedom of religion and conscience, he believes that Ms. Fluke (the single female witness) is not an appropriate witness.”…Issa also dismissed the Democratsâ€™ woman witness as a â€œcollege studentâ€™ who does not â€œhave the appropriate credentialsâ€ to testify before his committee.

How could Issa in the same breath use religion and conscience as a showcase for all those one-sided goings-on?
Does make one really pissed off, huh?
This comment by a female from the above post retorted just right: Typical Republicans. We don’t even get dinner before they try to screw us.

ReadÂ here about what Ms. Fluke’s testimony what have been — financial, medical and just plain common, compassionate sense.
Republicans as a group are really, really f**ked up.

Santorum for his twitchy part tried to dodge his sugar daddy’s big mouth, claiming Foster just tossed out a “stupid joke,” which was “in bad taste.”

Speaking of bad taste — the entire political spectrum in the US is a showcase for a nasty, ugly bad taste down in the throat which wants to explode out into big, huge, hairy chunks of distaste.
Foster may have gotten “a chuckle” out of this whole thing, US peoples may not think it so funny.
True, but humorless: 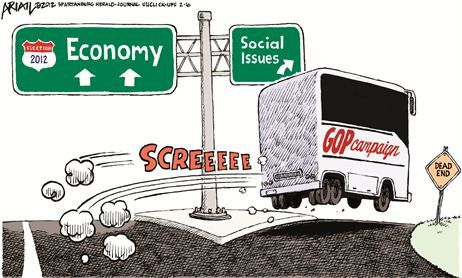