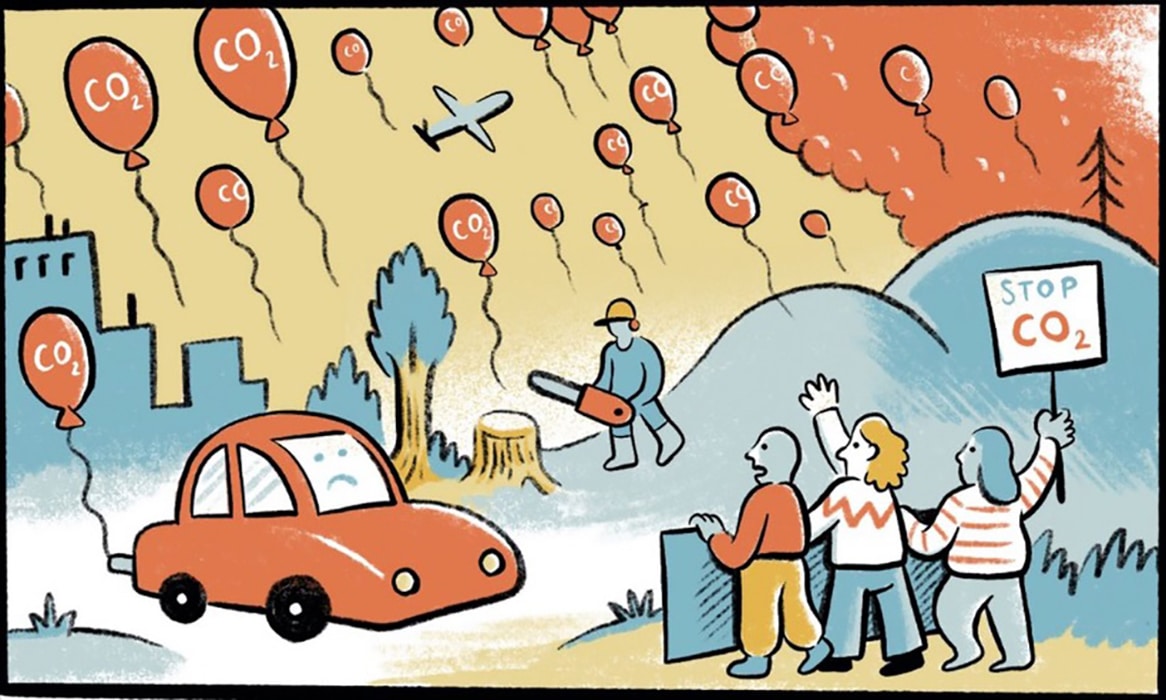 Once again putting aside guns and war and nasty Republican asshole politics this early-evening Saturday here in California’s Central Valley, maybe focus for a moment on probably the biggest-by-far threat to humanity, coming faster, too, eventually to engulf everybody’s neighborhood — climate change.
And what makes it more sad and frightful is the huge world-wide amount of togetherness is required to at minimum slow-down global warming, not stop it. That horse has already left the barn.

Our air is getting CO2ed to literal death:

421 parts per million, highest level of CO2 in human history. We're heading in the wrong direction and need to turn it around. We can start with a reconciliation bill that reduces emissions from fossil fuels.#ClimateChange @henryfountain https://t.co/XgLexWV3eo

The amount of planet-warming carbon dioxide in the atmosphere broke a record in May, continuing its relentless climb, scientists said Friday.
It is now 50-percent higher than the preindustrial average, before humans began the widespread burning of oil, gas and coal in the late 19th century.

There is more carbon dioxide in the atmosphere now than at any time in at least 4 million years, National Oceanic and Atmospheric Administration officials said.

The concentration of the gas reached nearly 421 parts per million in May, the peak for the year, as power plants, vehicles, farms and other sources around the world continued to pump huge amounts of carbon dioxide into the atmosphere. Emissions totaled 36.3 billion tons in 2021, the highest level in history.
As the amount of carbon dioxide increases, the planet keeps warming, with effects like increased flooding, more extreme heat, drought and worsening wildfires that are already being experienced by millions of people worldwide.
Average global temperatures are now about 1.1 degrees Celsius, or 2 degrees Fahrenheit, higher than in preindustrial times.

In reference/context of history via France24, also yesterday:

The measurements are taken at the Mauna Loa observatory in Hawaii, ideally located high on a volcano, which allows it to escape the possible influence of local pollution.

Before the Industrial Revolution, levels of CO2 held steady at around 280 ppm, a level maintained for approximately 6,000 years of human civilization that preceded industrialization, according to NOAA.

The level now is comparable to what it was between 4.1 and 4.5 million years ago, when CO2 levels were near or above 400 ppm, the agency said in a statement.

At that time, sea levels were between five and 25 meters higher than now, high enough to submerge many of today’s major cities.
Large forests also occupied parts of the Arctic, according to studies.

CO2 is a greenhouse gas that traps heat, gradually causing global warming. It remains in the atmosphere and oceans for thousands of years.
…
“Carbon dioxide is at levels our species has never experienced before — this is not new,” said Pieter Tans, a scientist with the Global Monitoring Laboratory.
“We have known about this for half a century, and have failed to do anything meaningful about it. What’s it going to take for us to wake up?”

Yeah, wake up what, or who? As noted above this needed ‘togetherness‘ right now is seemingly impossible, but T-Rump and Vlad Putin there’s no cease to the bullshit racket, making sure no one gets out of this shit alive.
Meanwhile, to further brighten the weekend, another warning off a study published last Thursday at Science, though, a cry in vain — the Abstract:

Ambitious conservation efforts are needed to stop the global biodiversity crisis. In this study, we estimate the minimum land area to secure important biodiversity areas, ecologically intact areas, and optimal locations for representation of species ranges and ecoregions. We discover that at least 64 million square kilometers (44-percent of terrestrial area) would require conservation attention (ranging from protected areas to land-use policies) to meet this goal.
More than 1.8 billion people live on these lands, so responses that promote autonomy, self-determination, equity, and sustainable management for safeguarding biodiversity are essential. Spatially explicit land-use scenarios suggest that 1.3 million square kilometers of this land is at risk of being converted for intensive human land uses by 2030, which requires immediate attention.
However, a sevenfold difference exists between the amount of habitat converted in optimistic and pessimistic land-use scenarios, highlighting an opportunity to avert this crisis.
Appropriate targets in the Post-2020 Global Biodiversity Framework to encourage conservation of the identified land would contribute substantially to safeguarding biodiversity.

Words in a mouth full.

Most-likely yet again Pinball is right on:

Once again here we are…