Smithfield Foods actually faces a more difficult task than transmogrifying the populations of America’s thirty-two largest cities into edible packages of meat.
Hogs produce three times more excrement than human beings do.
The 500,000 pigs at a single Smithfield subsidiary in Utah generate more fecal matter each year than the 1.5 million inhabitants of Manhattan.

And hence to the current swine flu problem.
Health officials have been seeking the source of the outbreak — 236 confirmed cases worldwide by Thursday afternoon, up 89 in 24 hours — and investigators might have discovered a good starting point:

AÂ report in the Guardian links La Gloria, a small town in eastern Mexico 12 miles from the Smithfield plant, as the possible epicenter of the recent outbreak.
The article cites that â€œ60% of the townâ€™s populationâ€¦has been affected.â€
Dr. Hansen weighs in:
â€œIf 60% of the population of a town near a huge swine facility got sick with this flu and those are among the first cases seen (e.g. close to ground zero), then that really does point a strong finger that something in that area could be the problem.
At the very least, there should be a very specific investigation of the Smithfield facility that involves significant testing of those pigs for swine flu.â€

A longshot Georgia candidate for governor whoâ€™s already admitted having sex with a mule before finding God says heâ€™s ready to sacrifice his own son in an effort to get his state to secede from the union.
…
Asked if he was ready to sacrifice his own son in a national insurrection, Horsley recounts a fight with his son where he almost killed him.
â€œI was one foot from killing my own son, or hurting him really, really bad,â€ Horsley told Krider. â€œIf he would have attacked me again, I would have stuck him. Or cut him or sliced him or done something to stop him. Thatâ€™s the point, you hypothetical has literally already been worked out with me, and thatâ€™s what makes me different from the other candidates for Governor.
…
â€œWhen you grow up on a farm in Georgia, your first girlfriend is a mule,â€ he said, adding, â€œYou experiment with anything that moves when you are growing up sexually.â€

_____________
Mule Ass
Is it cruel to say CongresswomanÂ Michele Bachmann of Minnesota appears to have the face of some Dreamworks-inspired-surrealistic mule?
Yes, the observation is way-too racial.
One can, however, state with near factual grace, she’s a mule’s asshole.
This todayÂ from the Daily Globe in Worthington, southwest of St. Paul:

Congresswoman looks more and more like a politician with permanent foot-in-mouth disease.
Yes, the 6th District Republican representative is opened her mouth again and, surprise, says something — either outrageous or wrong.
…
This month Bachmann claimed the six Muslim men removed from a plane at the Minneapolis-St. Paul airport in 2006 had come to the Twin Cities just to attend Rep. Keith Ellisonâ€™s election celebration.
She was wrong. The Muslims were in Minnesota to attend a national conference of imams.
Bachmann has become the poster child for bizarre politicians.

She apparently doesn’t give a “Hoot” about facts, any kind of facts.
_____________
Film at the Bijou
Kevin Spacey is about toÂ portray DC crook, Jack Abramoff,Â with a movie about the bitter, lying, corrupt years of GOP power.
Spacey, always the consumate actor, has done some prep work, visiting the most-high lobbyist of lobbyists in a Maryland federal pen:

Apparently, Spacey’s the only one signed so far for the project andÂ TalkingPointsMemo has a neat slide show on the possible candidates toÂ play figures in the sprawling, multi-character scandal.
Beware truth-seeking consumers, however, with anything carrying the phrase, ‘based loosely.’
______________
Doobie Brothers — Chrysler Goes Bankrupt
We should have knownÂ at the very-exact moment Chrysler/business icon Lee Iacocca tooled around the golf course with Snoop Dog — an image which seen the first time created a WTF sense of disbelief as in: What are they doing? Burning a fattie? — that some strange shit would come of it all.
And today it arrived with Chrysler’s official notice of bankruptcy as peoples worldwide took Iacocca’s well-known 1980s phrase to heart: “If you can find a better car, buy it.” 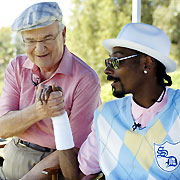 Apparently, Iacocca was pulled out of mothballs in 2005 (he retired in 1993) to help rescue a carmaker alreadyÂ a dead-men walking.
But the TV adsÂ were just too peculiar:

“He’s just a good kid,” Iacocca told USA Today about his co-star. “I didn’t understand half the things he was telling me, but it was fun.”
The spot ends with Snoop Dog giving his own version of Iacocca’s famous pitchline…
“If the ride is more fly, then you must buy,” Snoop Dog says.

Rep. Alcee Hastings (D-Fla.) read a very long list of sex acts not covered by the hate crimes bill on the House floor Wednesday.
One observer speculated that he â€œlikely set a congressional recordâ€ for citing the most sex acts of any speech in Congress.
â€œI apologize to our transcriber, but I want to put into the record what we have to put up with in the Rules Committee,â€ said Hastings. What followed was a very long and unusual list of sex acts not protected by the proposed bill.
Hasting was reading the list of sex acts with reference to an amendment introduced to the hate crimes bill that he asserted made a mockery of what was a determined effort by House Democrats to pass a federal hate crimes law.
Among the sex acts to be protected in the amendment included asphyxiphilia, necrophilia, toucherism and tranvestite fetishism.
â€œWe canâ€™t legislate love,â€ Hastings said. â€œBut we can legislate against hate.â€
The House passed the hate crimes bill Thursday.

While doing the nasty on the Queen’s lawn:

Ignoring signs asking visitors to Please Keep Off The Grass, the man and woman, said to be in their early 30s, selected a spot near the castle’s Garter Tower and stripped off in full view of hotels, pubs and shops.
An employee at the Harte and Garter Hotel, which overlooks the castle, said guests went out to observe the scene and could not believe their eyes.
The woman, who asked not to be named, said: “People were shouting things like ‘what are you doing?’ but the couple didn’t seem to care at all. It was going on for about 10 or 15 minutes, which is quite a long time, considering the location.”
Another witness, Mark Robinson, 44, said the couple carried on until police intervened.
He said: “The officers told them to stop and the sight of the uniforms seemed to snap them out of it. They were unsteady on their feet and the guy pulled his trousers up and helped the girl put hers back on.
“The Japanese tourists were comparing their videos.”
A spokesman from Thames Valley police confirmed that two people had been arrested and cautioned for outraging public decency.
It is not known whether the Queen was in residence at Windsor Castle at the time.

Unsteady as it goes.