Two US marinesÂ were killed Saturday in southern Afghanistan, two more died Monday, while the UK lost eight soldiers in a swift, 24-hour period at the end of last week — a war getting worse and already in apparent bad need of more boots on the ground.
An ironic scenerio when coupled with the recent death of bullet-Bob ‘Strange’ McNamara, a self-taught expert onÂ how to horrify even aÂ war, and seemingly one of the more despicable people this side of Dick Cheney. 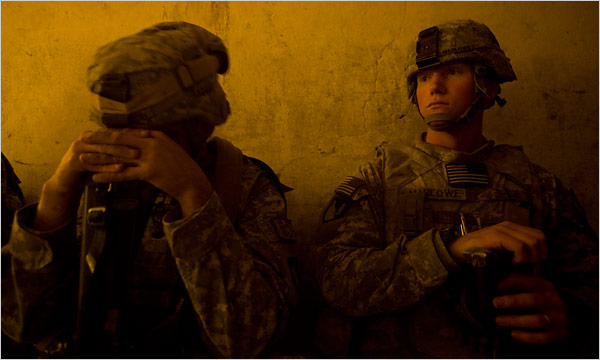 (Illustration above is from a New York Times story last November and is found here).

Bob McNamara tried to run a warÂ like the Ford Motor Company and it cost 58,000 US lives, not to mention a shitload of money — Between 1965 and 1967, US spending on the Vietnam War escalated from $1 billion to $20.6 billion.
LBJ bailed McNamara’s sorrowful ass out of the Vietnam catastrophe with the presidency of the World Bank, where Bullet-Bob created another debacle but this time worldwide, mostly by lending tons and tons of money to authoritarian dicatorships.
A good, swift look at McNamara’s nasty World Bank days can be found here.

Bullet Bob wouldn’t blink an eye to a major troop escalation in Afghanistan.
Even with the first major US Afghan operationÂ under President Obama’s watch only 10 days old — 4,000 Marines and hundreds of Afghan troops are working the Helmand River Valley in southern Aghanistan searching for the Taliban — the situation in country is and will get nasty.
A Taliban spokesman: “I cannot accept the fact that 4,000 US troops have taken part in this operation,” he said, quoted by the Afghan AIP news agency. “I consider it a part of a psychological war, but if 4,000 US troops really are taking part in the operation, they will not have any permanent victory.”

The Brits have lost 15 soldiers in the past 11 days, including the eight killed Friday, bringing the UK’sÂ total losses to 184,Â now more thanÂ the 179Â the country lostÂ in Iraq.
According to the UK’s Independent:

The offensive in Helmand is exacting a heavy toll on the coalition — 11 Americans and two Canadians also died in the past week.
Senior British defence sources say that about 190 Taliban fighters have been killed in the British end of the operation, with about 60 more, many of them foreign fighters, still putting up resistance.

And in that bloody Helmand province on Monday, a NATO helicopter operated by civilian contractors crashed, killing all six aboard — the Taliban claimed they shot it down, but they always say that.
There’s been continued intense fighting all over that boiling country — in the last couple of days,Â insurgents attacked a compound in Uruzgan province north of Kandahar; in the northeast a pitched battle in Kunar province, and in eastern Paktia province in the middle of the country along the Pakistan border more bullets flying — without an end in sight.

The aim of all this nasty, bloody dust-ups is to calm the countryÂ fromÂ the US perspective, and to uncalm the country in the Taliban view, prior to the August 20 national elections — which appear to be an unsafe proposition: Zeina Khodr, Al Jazeera’s correspondent in Kabul, said: “Security is proving to be a major challenge in the upcoming presidential elections.Â  According to the interior ministry, 134 out of 364 districts in the country are deemed unsafe. There are more than 28,000 polling stations across Afghanistan, and according to the free and fair election foundation here, 30 per cent of those polling stations will not be secured.”
One major problem: AfghanÂ cops are being killed at an alarming rate — “six to 10 police every day since March with nearly 50 killed in attacks in the past week alone…”
Afghan police in some places, however, are not peace officers:

As British troops moved into the village newly freed from Taliban control, they heard one message from the anxious locals: for God’s sake do not bring back the Afghan police.
…
But as they advance, they are learning uncomfortable facts about their local allies: villagers say the government’s police force was so brutal and corrupt that they welcomed the Taliban as liberators.
“The police would stop people driving on motorcycles, beat them and take their money,” said Mohammad Gul, an elder in the village of Pankela, which British troops have been securing for the past three days after flying in by helicopter.
He pointed to two compounds of neighbors where pre-teen children had been abducted by police to be used for the local practice of “bachabazi,” or sex with pre-pubescent boys.

In fact, police and official Afghan government corruption is the biggest problem in handling this dirty, little war: A 2007 International Crisis Group report entitled “Reforming Afghanistan’s Police” found that Afghans often view the police “more as a source of fear than of security.”

In aÂ NYT review this week of the RAND Corporation political scientist Seth G. Jones’s new book, “In the Graveyard of Empires: America’s War in Afghanistan,” a picture is painted of hopeless defeat:

The tragedy of Afghanistan, Mr. Jones concludes — in a passage that echoes the conclusions about Iraq that the Washington Post special military correspondent Thomas E. Ricks drew in his 2006 book, â€œFiascoâ€ — is that the â€œrise of the insurgency in the wake of the U.S. victory over the Talibanâ€ in 2001 â€œwas not inevitableâ€ but the result of the failure of the Rumsfeld Pentagon and the Bush White House, which were preoccupied with Iraq, to listen to â€œseasoned diplomats and military commanders in Afghanistanâ€ who were calling for more resources and troops.
It was also a failure, Mr. Jones reminds us, to learn from history; after all, â€œpast empires that have dared to enter Afghanistan — from Alexander the Great to Great Britain and the Soviet Union — have found initial entry possible, even easy, only to find themselves fatally mired in local resistance.â€
Which is why that harsh and mountainous country has become known, in the words of his bookâ€™s title, as â€œthe graveyard of empires.â€

The powers-that-be, however, never, ever learn.
Escalation is just a matter of time.
Obama’s waiting for those national election results.
According to Politico:

â€œI think that all of us are going to have to do an evaluation after the Afghan election to see what more we can do,â€ Obama said in an interview broadcast Sunday on Sky News.
â€œIt may not be on the military side. It may be on the development side, providing Afghan farmers alternatives to poppy crops, making sure weâ€™re effectively training a judiciary system and a rule of law in Afghanistan that people trust.â€

Such bullshit, Mr. President.
Obama’s hand-picked commander for Afghanistan, Gen. Stanley McChrystal, one wacked, military nutcase in his own right with his own tortured background, has reportedly said heÂ would ask for more US troops despite being told he wouldn’t get them — if the situation warrants more US GIs in country.
More cannon fodder was needed yesterday.

Last spring, McChrystal toured Afghanistan under the guise of talking to people in order to develop a new strategy, but he already knew full well a shitload of fresh GIs was desperately required in order to at least bring a bit of calm to the country.
In illustration was this routine — According to the BBC:

In a traditional reception room the size of a tennis court, Gen McChrystal listened intently to an Afghan governor.
The official told the commander that he had only taken his job after being led to believe by the Afghan government that the security situation was good — but it turned out it was not.
Gen McChrystal then joked that US President Barack Obama had “done exactly same thing to me” — provoking laughs from the assembled audience.

And what do these cannon fodder boys and girls from all over the world face in Afghanistan?
In an interesting, but realistically depressing post at counterpunch.org, can be seen a tactic similar to Muhammad Ali’s old ‘rope-a-dope’ boxing technique — “Float like a butterfly, sting like a bee” —the Taliban’s strategic aim is to wear down their adversaries by keeping them under continual strain and by working on their psychology, or as the late American strategist John Boyd would say, by getting inside, slowing down, and disorienting their adversary’s Observation-Orientation-Decision-Action (OODA) loops.

And this piece (mentioned in the above counterpunch story) fromÂ the timesonline about the UK’s Welsh Guards in Afghanistan (but it could be any troops from any number of countries):

Such operations, which often come under fire, are exhausting, frustrating and take place every day.
To avoid the bombs the British troops have to be efficient, and to some degree lucky, all the time; Taleban bombmakers need to be lucky once.
The Welsh Guards Reconnaissance Platoon has lost almost two thirds of its strength to casualties over the past two months.
Many Welsh Guardsmen have fought more firefights than they can remember.
Though morale appears solid, some are clearly feeling great strain.
â€œI just feel cold inside,â€ one very young soldier said in a quiet moment last week, admitting that the death of his platoon commander some weeks earlier had left his unit grief-stricken.
In some firefights, he said with odd detachment, he was finding it increasingly hard not to freeze up, to stay in control of himself.

Obama’s asking for real-bad trouble if he doesn’t get everybody the shit-out-of-Dodge.