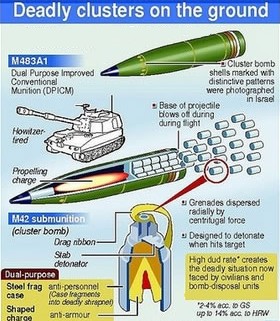 In the middle of some horrific and nasty events this past week comes a piece of news that really, really sucks — the US has been working quietly behind the scenes to water down the international ban on cluster bombs.
And it’s the 1 percent greed factor — from The Hill this week:

Two prominent senators want Secretary of State Hillary Clinton to steer talks on an international weapons ban away from a plan they say would harm U.S. defense firms that manufacture cluster weapons.

The assholes are (of course) GOP assholes — Jon Kyl and Richard Lugar — and they want to make sure US-built cluster bombs keep on killing most-indiscriminately.

And make no mistake about it, the US is forcing the world to once again allow the engagement of one of the most-nefarious of weapons — cluster munitions just keeps on killing for years and years, a quick-busting, maiming, killing snake-in-the-grass (or ruin).
From an opinion/commentary in the UK’s Independent:

Britain used to be one of the leading lights on the issue of cluster bombs.
Following the lead on landmines of Diana, Princess of Wales, the Foreign Office proved one of the main movers of the ground-breaking 2008 Convention on Cluster Munitions, helping to persuade 22 of 28 NATO allies to sign up to the agreement to ban their use.
It comes as something of a shock, therefore, to find that the Government has been backsliding in the face of determined opposition to the ban by the exporters of these deadly weapons, led by Washington.
The US, along with Russia, China, South Korea, India and Pakistan, have come up with an alternative, and unpalatable, proposal for a meeting in Geneva later this month.
Forget a total ban, they propose, instead agree a watered-down version as an amendment to the Convention on Certain Conventional Weapons from the early 1980s.
Under this, countries will be allowed to use cluster bombs as long as they are of more recent manufacture (after 1980) and have a failure rate of less than 1 per cent or a self-destruct mechanism.
…
In this case, the only response can be: no.
Compromise is neither right nor possible.
Cluster bombs are an abomination.
They are indiscriminate, hurting civilians as much as combatants.
They can lie around for years as unexploded ordnance to endanger the limbs and lives of children and ordinary civilians.
They are based on a principle of maximum harm that belies any hope of restraint or humanity.

Hard to fathom a winner of the Nobel Peace Prize would allow horrible shit like this to happen.
But…

And although the president of the International Committee of the Red Cross, Jakob Kellenberger, has called the new press on the cluster-bomb ban, “…a step backwards, it is a much lower standard,” the US is seeking consensus next week during a big pow-wow in Geneva by envoys from 114 countries.

Cluster bombs are really, really most horrifying, and, because of the way they operate, they are also called “dumb bombs.”
See a good video here on cluster munitions.
In nut form, cluster bombs are little hellish pellets released by a big mother bomb dropped from an aircraft or fired from a cannon, and these little pills are supposed explode, but most just plop themselves on the ground, scattered about to kill later.
Especially children, and farmers.
From the Cluster Munition Coalition website:

Air-dropped or ground-launched, they cause two major humanitarian problems and risks to civilians.
First, their widespread dispersal means they cannot distinguish between military targets and civilians so the humanitarian impact can be extreme, especially when the weapon is used in or near populated areas.
Many submunitions fail to detonate on impact and become de facto antipersonnel mines killing and maiming people long after the conflict has ended.
These duds are more lethal than antipersonnel mines; incidents involving submunition duds are much more likely to cause death than injury.

Last year, The Convention on Cluster Munitions banned the stockpiling, use and transfer of virtually all existing cluster bombs, and also provides for the clearing up of unexploded munitions — the treaty went into effect without the signature of the US, Russia and China.
And despite the US being an asshole, the ban appears to be working.
From Human Rights Watch after a meeting of the coalition this past September:

â€œThis weekâ€™s meeting has shown how the cluster bomb ban is not only working, it is powering ahead in bringing more states on board and in destroying cluster munitions. The US and other nations should join them,â€ said Steve Goose, director of the Arms Division at Human Rights Watch and co-chair of the Cluster Munition Coalition (CMC).
â€œEvery cluster munition destroyed represents future lives saved.â€
…
â€œThis extraordinarily rapid destruction of stockpiles just one year into the life of the convention demonstrates the strong commitment of governments to urgently tackle this issue,â€ said Goose.

Except in the good-old US or A.

And these devices kill for generations — in Cambodia just last week: The unexploded devices — including anti-personnel landmines, anti-vehicle weapons and cluster munitions — were found within a five square kilometre radius of the school and some as close as 100 metres from areas where the school children and villagers frequent on a daily basis.
In a more-recent war zone: A shepherd narrowly survived after a cluster bomb left over from the July-August 2006 war with Israel exploded in the southern town of Shebaa Sunday morning wounding and killing several goats, reported Lebanonâ€™s National News Agency.
Happily, it was just goats, but still…