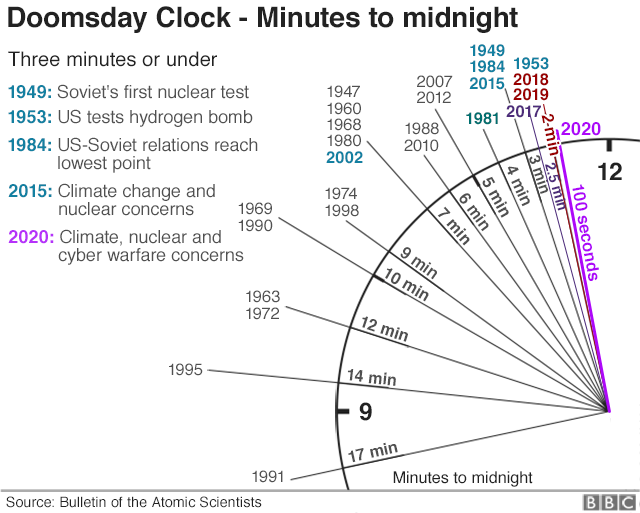 Just when shit is getting shittier with the T-Rump’s impeachment trial and all, and rolling all the shit into up clump of asshole ugly, now the timer’s reset — from NPR this evening:

Two years after moving the metaphorical minute hand of its Doomsday Clock to within two minutes of midnight — a figurative two-minute warning for all humanity — the science and security board of the Bulletin of the Atomic Scientists revealed Thursday that it has moved that minute hand another 20 seconds closer to the midnight hour.
“It is 100 seconds to midnight,” declared the Bulletin’s president and CEO, Rachel Bronson, at a Washington, D.C., news conference as a black cloth was lifted to reveal the clock.
Never since the clock’s 1947 Cold War debut has it come so close to the putative doomsday annihilation represented by the 12 a.m. hour.
“The Doomsday Clock is a globally recognized indicator of the vulnerability of our existence,” said former Irish President Mary Robinson at the annual clock-unveiling ceremony.
“It’s a striking metaphor for the precarious state of the world, but most frighteningly, it’s a metaphor backed by rigorous scientific scrutiny.”

And some horrible humor, too:

“What you’re hearing,” said former California Democratic Gov. Jerry Brown, who appeared at the event as the Bulletin’s new executive chairman, “is really the voices of the prophets of doom. Speaking of danger and destruction is never very easy — if you speak the truth, people will not want to listen, because it’s too awful and it makes you sound like a crackpot.”
…
Brown, who served four terms as California’s top executive, noted that he’d spent his life seeking the favor of powerful people whom he described as “totally ignorant, blind and deaf to our predicament.”
“So the task is wake up,” the 81-year-old former governor concluded.
“Wake up America, wake up the world — it is 100 minutes before doomsday!”
Robinson, the former Irish president, leaned over to softly correct Brown.
“One hundred seconds before doomsday,” she murmured, amid laughter.
“Seconds?” replied Brown.
“Well, it just shows you, we don’t even know what the hell we’re talking about! There’s Exhibit A of why we’ve got a problem! It is definitely more serious than minutes — it’s seconds.”

(Illustration, ‘A Break in Reality’ by Xetobyte (found here).