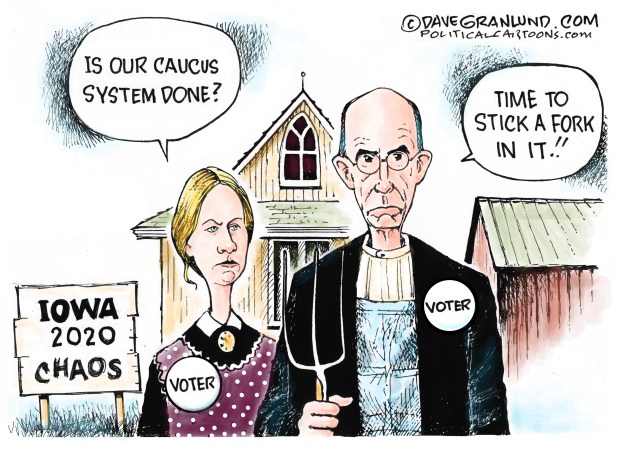 While the Senate cooled to GOP members offering up varied, delusional rationales to exonerating the T-Rump — though all excuses carried similar bottom-lines: ‘Inappropriate’ conduct/crime committed, but who cares — in Iowa, Democrats started the 2020 expedition off on shitty footing, creating fodder for Republicans, and despair to everyone else. (Illustration-cartoon found here).

Now in the evening some results are trickling in…

All this in the lumering shadow of T-Rump’s State of the Union bullshit later on tonight. The Iowa debacle gives cover for Republicans to blast the caucuses as being rigged, working on the T-Rump’s favorite mode of conduct — spread chaos and division, like this shit:

What are the odds that:

?? most anticipated poll of the year (@DMRegister) is cancelled.

….and it has nothing to do with a Bernie blowout and a Biden crash?

Although early numbers from Iowa (or late-as-shit figures) have Bernie Sanders and Pete Buttigieg nearly neck-and-neck, there’s an apparent melancholy tinge: ‘In an email to supporters, Sanders’ campaign manager, Faiz Shakir, said, “Last night was a bad night for democracy, for the Democratic Party, and for the people of Iowa.”‘
Sad and depressing for the coming months as I occasionally have a deep-dark over-shadowing sense (same, similar gut-clinch first experienced in the summer of 2016) that the T-Rump will get re-elected — not only using the GOP side of the election, but also taking in account Democrats’ hideous history of shooting themselves in the proverbial foot, fucking up shit in an obvious fashion (i.e., the Iowa caucuses).
As I’ve written on many occasions, if the T-Rump and a goodly number of Republicans down ticket are not thrown out of office at least in November, the US, and the world, is way-fucked.

The Iowa disaster could be an origin story — from Dan Balz at the Washington Post this afternoon:

The situation was ready-made for a president who thrives on chaos, who likes nothing more than to seize on the weaknesses of his opponents.
Trump’s political style is to divide and conquer, which is how he won the presidency.
He is now hoping to divide the Democrats as a way to disrupt the selection of his November rival, weaken his eventual challenger and raise broader doubts about the Democrats’ readiness to govern.
For Trump, the breakdown in Iowa allowed the spotlight to turn back to him without any of the Democrats being able to fully celebrate victory and gain the kind of attention that other winners in Iowa have enjoyed.
The caucuses were supposed to be the one moment for Democrats to seize the headlines in a week when much focus will be on the president, a week that would include Tuesday’s State of the Union address and Wednesday’s vote in the Senate that will end the impeachment process with an expected acquittal on both articles approved by the House.
The president, feeling both exonerated and emboldened, will use the two events as moments of triumph and as a return to business as usual.
Whatever history says about the impeachment of this president, and however the coming campaign year treats him, the months since the impeachment proceedings began certainly have been beneficial to him politically.
Support for his removal from office has ticked down slightly from where it was when the House began its inquiry.
Additionally, Gallup reported Tuesday that the president’s job approval rating has risen to 49-percent, the highest of his presidency.
Gallup’s numbers reflect not only a rise in his approval among Republicans, to 94-percent, but also among independents, where his current 42-percent is five points higher than in early January and marks another high among those Americans.
…
Democrats can survive Monday night’s messy counting in Iowa.
The calendar moves swiftly from here, and the absence of clarity in Iowa will give way to results of upcoming primaries and caucuses.
Whether those contests produce an effective nominee by the end of March and one who can rally the Democratic base and appeal to other voters who could help decide the general election is the question that worries many strategists.
The president will do what he can to keep the Democrats off-balance and jumped at the opportunity he was given from Iowa.
Democrats can’t afford to give him more openings.