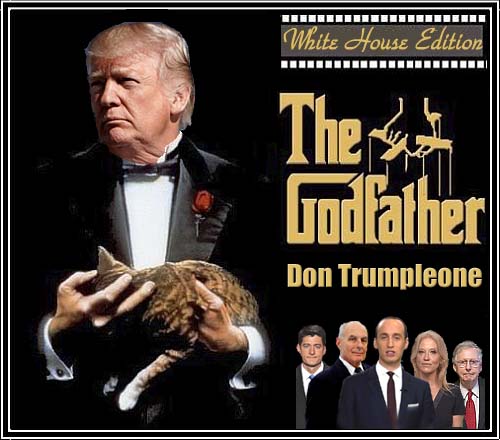 One day to the next, the T-Rump flies further off the corruption rails, not content with nasty meddling in court cases, now he’s just eliminating the justice part of the system and pardoning the already convicted.

However, there’s a bright light — Maxine Waters responded to the T-Rump’s antics today, tweeting ugly reality in the mockery of law and order, chewed his ass out for being a corrupted, criminal asshole and finished with this: ‘“Trump doesn’t seem to care that it’s rumored he has mafia associations, but he sure acts like a mafia boss!”‘

Phillip Bump at the Washington Post this morning, and the impact-value of DeBartolo’s pardon come November:

Ed DeBartolo Jr. did eventually face criminal charges after being solicited for a bribe by the governor of Louisiana and failing to report it.
He agreed in 1998 to serve two years’ probation and pay $1 million in fines.
He transferred ownership of the 49ers to his sister Denise DeBartolo York in 2000.
On Tuesday, President Trump granted DeBartolo a full pardon.
In the abstract, it’s an odd decision, focused on someone whose infraction was fairly minor and resolved two decades ago.
It may be a function in part of the 49ers’ reemergence as a force in the NFL.
But it may also be a way to send a signal to a critical part of an important state.
In the 2016 election, Mahoning County, where Youngstown is located, narrowly voted for Hillary Clinton over Trump, though Trump benefited from a 25-point swing in his favor.
Trumbull County, where Warren and Howland are located, voted Republican for the first time since 1972.
Trump won Ohio by eight points, but polling last year had him trailing some potential Democratic opponents.
Locking down Mahoning County, 2 percent of the state’s population, doesn’t hurt Trump’s chances.
There are other reasons for Trump to have been sympathetic to DeBartolo, including that the Youngstown native supported Trump’s presidency.
But someone, somewhere, no doubt kept Trump apprised of DeBartolo’s popularity in a region central to U.S. presidential politics.

Not only is the T-Rump an unmitigated liar without an ounce of empathy, nasty-mouthed and cruel, he’s also a criminal without any constraints, though, a chicken-shit mafia ‘boss.’ And he’s been that way a long, long time.
A startling example comes from an extract of the book, “Sinking in the Swamp: How Trump’s Minions and Misfits Poisoned Washington,” published last week.
Via TPM:

Throughout Donald Trump’s long?running history of legal threats and maneuvers, there has been rampant bluffing, oftentimes taking the shape of verbally violent bluster.
In his earlier real estate days, he was known to privately threaten businessmen, lawyers, and other adversaries with “my friends in Jersey” if he felt someone had crossed him.
It is unclear if his threats of Mafia violence were backed up by anything remotely actionable or within his power to authorize, or if he was just making a big-boy noise.
Most people who heard this simply rolled their eyes and went about their day.
President Trump was never able to shed his affinity for mob?don lingo, or at least his pop culture approximation of it.
He’d repeatedly blast his former fixer and attorney, Michael Cohen, for being a snitch and a rat for cooperating with the feds and making him look bad, for instance.
And Trump sues, or more often emptily threatens to sue or inflict pain via the justice system, as if failing to do so will cause him erectile dysfunction.

And this at the Guardian last October:

In 2013, three years before Trump’s presidential victory, David Letterman asked him about it bluntly on his CBS talk show.
“Have you ever knowingly done business with organized crime?” the host asked.
Trump grimaced, then said: “I’ve really tried to stay away from them as much as possible.
“You know, growing up in New York and doing business in New York, I would say there might have been one of those characters along the way, but generally speaking I like to stay away from that group.”
Then he added: “I have met on occasion a few of those people. They happen to be very nice people.”
Trump’s characterization of New York crime families as “very nice people” might surprise those at the receiving end of Gambino racketeering, Lucchese loan sharking or Bonanno fraud.
Not to mention the murders.

As we look for results off an emergency meeting today of the 1,100-member Federal Judges Association on T-Rump’s legal DOJ bullshit — Judge Cynthia M. Rufe, who heads the association reportedly said the matter was urgent and “could not wait” — the legacy of America is being fucked…