Couple of important, and deadly news stories this Monday morning (among a shitload, I know), which paint a terrible future.

First and most immediate — COVID is now indeed a Red beast: 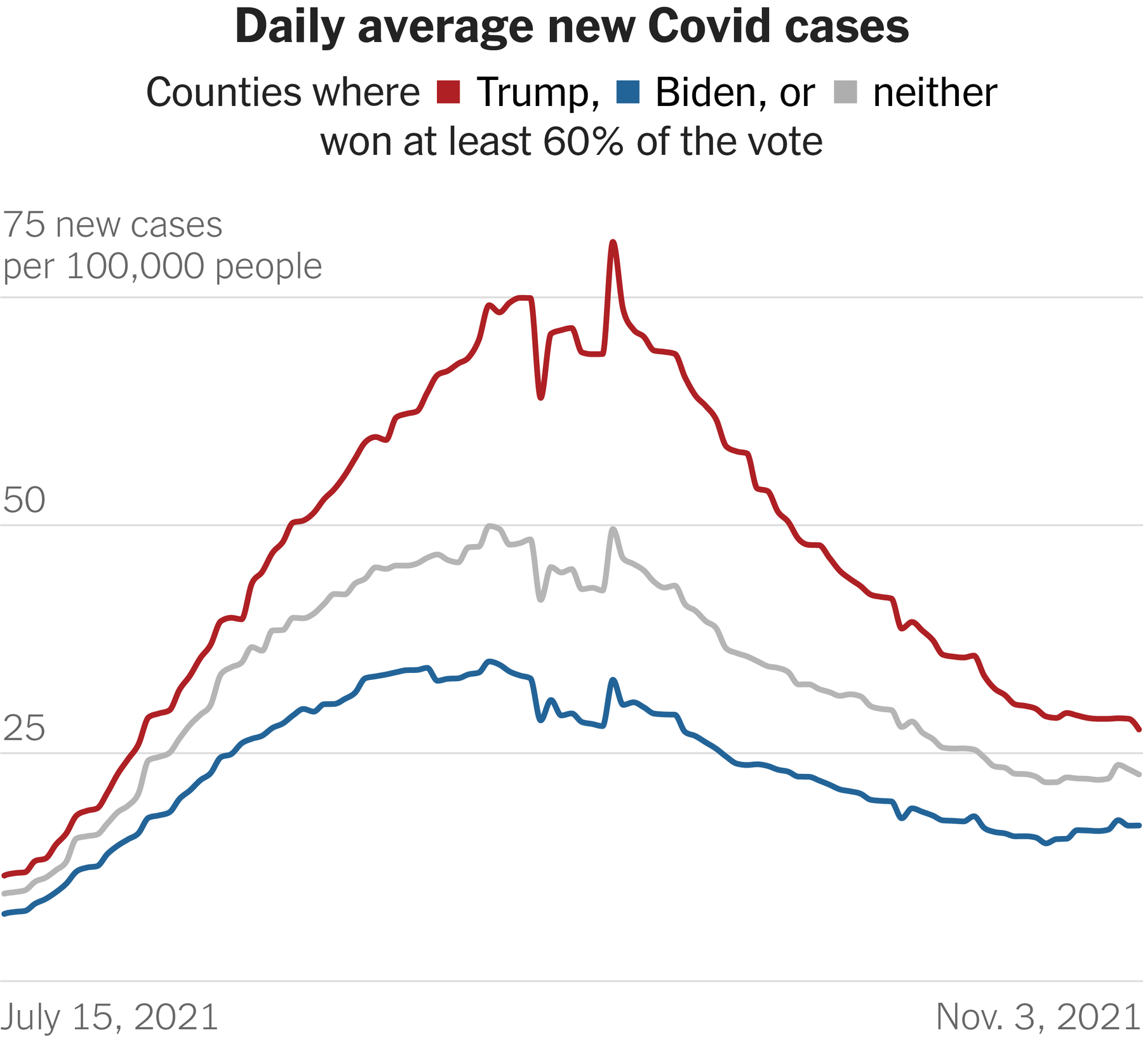 A real, hardcase reason we’ll seemingly never get rid of COVID, at least not in the foreseeable near-time, and just from how MAGA hatters, wingnutters, and nutcases flourish when provoked (Big Bird, anyone) the virus will continue to circulate even among the sane.
According to The New York Times piece this morning, the obvious reality on the Red/Blue divide arrived hard-fast with the arrival of the vaccines — anti-vaxxing became standard Republican party protocols.
High points of the NYT report (h/t tengrain):

Then the vaccines arrived.

They proved so powerful, and the partisan attitudes toward them so different, that a gap in Covid’s death toll quickly emerged.
I have covered that gap in two newsletters — one this summer, one last month — and today’s newsletter offers an update.

The brief version: The gap in Covid’s death toll between red and blue America has grown faster over the past month than at any previous point.

In October, 25 out of every 100,000 residents of heavily Trump counties died from Covid, more than three times higher than the rate in heavily Biden counties (7.8 per 100,000).
October was the fifth consecutive month that the percentage gap between the death rates in Trump counties and Biden counties widened.

Some conservative writers have tried to claim that the gap may stem from regional differences in weather or age, but those arguments fall apart under scrutiny. (If weather or age were a major reason, the pattern would have begun to appear last year.)
The true explanation is straightforward: The vaccines are remarkably effective at preventing severe Covid, and almost 40 percent of Republican adults remain unvaccinated, compared with about 10 percent of Democratic adults.
…
This situation is a tragedy, in which irrational fears about vaccine side effects have overwhelmed rational fears about a deadly virus. It stems from disinformation — promoted by right-wing media, like Rupert Murdoch’s Fox News, the Sinclair Broadcast Group and online sources — that preys on the distrust that results from stagnant living standards.
…
Still, nobody knows what will happen next. Much of the recent decline in caseloads is mysterious, which means it may not last.
And the immunity from vaccination appears to be much stronger than the immunity from infection, which means that conservative Americans will probably continue to suffer an outsized amount of unnecessary illness and death.

In this day and age, it’s still really hard to grasp that living people, especially in a vaccine-historic America — we’ve been getting vaccines for all kinds of shit, from polio, measles, etc, for decades and decades. The horror comes via the right-wing media and the entire Republican party — like Republicans/Tucker Carlson screaming anti-vaxx messages while being fully vaxxed. An amazing shitload of people have an amazing shitload of blood on their hands — a shitload!

Anyway and meanwhile, the second important news item this morning came late yesterday afternoon — there are way-major hurdles facing humankind on getting a decent handle on climate change before it’s too late, but now word how the world has been working with fraudulent data:

Many countries undercount their greenhouse gas emissions in reports to the U.N., a Washington Post investigation of 196 country reports found.

There is a giant gap between what nations declare their emissions are versus the greenhouse gases they release. https://t.co/sAKAxpP4kS

Another brick in the wall — from The Washington Post:

Across the world, many countries underreport their greenhouse gas emissions in their reports to the United Nations, a Washington Post investigation has found. An examination of 196 country reports reveals a giant gap between what nations declare their emissions to be versus the greenhouse gases they are sending into the atmosphere.
The gap ranges from at least 8.5 billion to as high as 13.3 billion tons a year of underreported emissions — big enough to move the needle on how much the Earth will warm.

The plan to save the world from the worst of climate change is built on data. But the data the world is relying on is inaccurate.

“If we don’t know the state of emissions today, we don’t know whether we’re cutting emissions meaningfully and substantially,” said Rob Jackson, a professor at Stanford University and chair of the Global Carbon Project, a collaboration of hundreds of researchers.
“The atmosphere ultimately is the truth. The atmosphere is what we care about. The concentration of methane and other greenhouse gases in the atmosphere is what’s affecting climate.”
…
As tens of thousands of people are convening in Glasgow for what may be the largest-ever meeting of the United Nations Framework Convention on Climate Change (UNFCCC), also known as COP26, the numbers they are using to help guide the world’s effort to curb greenhouse gases represent a flawed road map.

That means the challenge is even larger than world leaders have acknowledged.

“In the end, everything becomes a bit of a fantasy,” said Philippe Ciais, a scientist with France’s Laboratory of Climate and Environmental Sciences who tracks emissions based on satellite data.
“Because between the world of reporting and the real world of emissions, you start to have large discrepancies.”
…
A new generation of sophisticated satellites that can measure greenhouse gases are now orbiting Earth, and they can detect massive emissions leaks.
Data from the International Energy Agency (IEA) lists Russia as the world’s top oil and gas methane emitter, but that’s not what Russia reports to the United Nations. Its official numbers fall millions of tons shy of what independent scientific analyses show, a Post investigation found.
Many oil and gas producers in the Persian Gulf region, such as the United Arab Emirates and Qatar, also report very small levels of oil and gas methane emission that don’t line up with other scientific data sets.

“It’s hard to imagine how policymakers are going to pursue ambitious climate actions if they’re not getting the right data from national governments on how big the problem is,” said Glenn Hurowitz, chief executive of Mighty Earth, an environmental advocacy group.

You betcha, ‘hard to imagine‘ the bad shit coming, without noticing the bad shit already here. You know what would be could good? A vaccine for climate change. Yet even there, someone like douche canoe Ted Cruz would scream ‘government propaganda,’ and we need to face climate change like a man, with freedoms.
Or what-the-fuck ever.

Or sometime/somewhere in the future:

Yet once again, here we are…