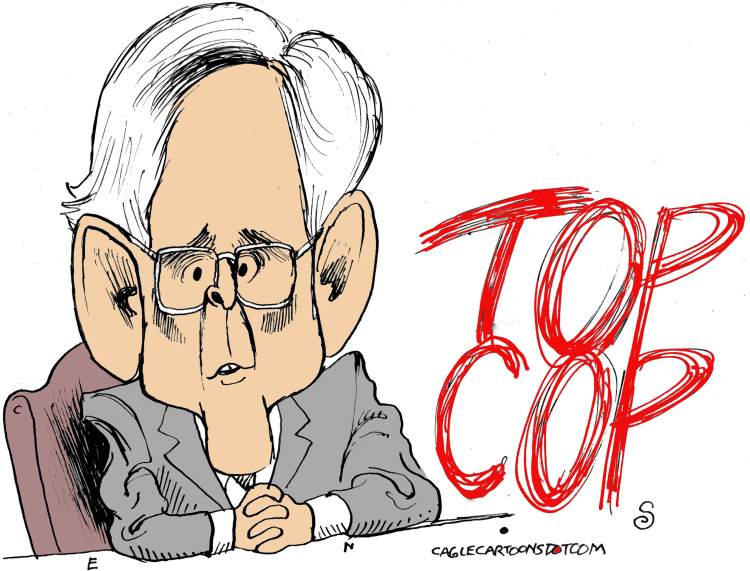 Sign of life, maybe?
Merrick Garland has been acting quiet the last year on any kind of action on the T-Rump criminal works, and many had figured he’d been napping this whole time. Even despite this in March: ‘On his first anniversary as attorney general, Merrick Garland said he’s committed to unraveling the conspiracy behind the storming of the U.S. Capitol, in what he calls “the most urgent investigation in the history of the Justice Department.”‘

Hopefully, an initial stir toward a tsunami in prosecution waters:

Breaking NYT: The Justice Department has asked the Jan. 6 Committee for transcripts of interviews it's conducting. The panel has interviewed more than 1,000 people so far.

The move is the clearest sign yet of a wide-ranging inquiry at DOJ.https://t.co/LPqNaR4uKM

Some good news via The New York Times late this Sunday afternoon:

The Justice Department has asked the House committee investigating the Jan. 6 attack for transcripts of interviews it is conducting behind closed doors, including some with associates of former President Donald J. Trump, according to people with knowledge of the situation.

The move is further evidence of the wide-ranging nature of the department’s criminal inquiry into the events leading up to the assault on the Capitol and the role played by Mr. Trump and his allies as they sought to keep him in office after his defeat in the 2020 election.

The House committee, which has no power to pursue criminal charges, has interviewed more than 1,000 people so far, and the transcripts could be used by the Justice Department as evidence in potential criminal cases, to pursue new leads or as a baseline for new interviews conducted by federal law enforcement officials.

Aides to Representative Bennie Thompson, Democrat of Mississippi and the chairman of the committee, have yet to reach a final agreement with the Justice Department on what will be turned over, according to a person with knowledge of the matter who spoke on the condition of anonymity because of the confidential nature of the investigations.

On April 20, Kenneth A. Polite Jr., the assistant attorney general for the criminal division, and Matthew M. Graves, the U.S. attorney for the District of Columbia, wrote to Timothy J. Heaphy, the lead investigator for the House panel, advising him that some committee interviews “may contain information relevant to a criminal investigation we are conducting.”

Mr. Polite and Mr. Graves did not indicate the number of transcripts they were requesting or whether any interviews were of particular interest.
In their letter, they made a broad request, asking that the panel “provide to us transcripts of these interviews, and of any additional interviews you conduct in the future.”

A person familiar with the matter said the transcripts were part of a negotiation between the committee and the Justice Department in which the panel was hoping that prosecutors would turn over evidence in exchange for the transcripts.
…
Thus far, the Justice Department has prosecuted more than 800 people on charges related to the storming of the Capitol. But over the past several months, the department has taken steps to widen its focus substantially to look at the planning for the rally on Jan. 6 that preceded the riot while also signaling that its investigation would encompass the broader efforts to overturn the election. And in recent weeks,
Attorney General Merrick B. Garland has bolstered the core team tasked with handling the most sensitive and politically combustible elements of the inquiry.

Several months ago, the department quietly detailed a veteran federal prosecutor from Maryland, Thomas Windom, to the department’s headquarters. He is overseeing the politically fraught question of whether a case can be made related to other efforts to overturn the election, aside from the storming of the Capitol.
That task could move the investigation closer to Mr. Trump and his inner circle.

Of course, we’ll have to wait and see, but if public hearings for the House’s Jan. 6 committee, scheduled to start next month, bring an emotional excitement to the airwaves with some nasty legal shit for Republicans, maybe Garland will respond in course. Or maybe, or off-the-wall maybe, he’s been working at it hard all along, just keeping near-silent until he’s got the real goods on T-Rump and his boys to put them in the slammer.
One can only hope.

Courtroom drama or not, here we are once again…

(Illustration out front is of a New York state high-school student exhibit: ‘The piece was displayed during student-driven art show at Shenendehowa High School. It consisted of at least 12 identical black-and-white pictures of Donald Trump. There was also a sign above the pictures that read, “Draw on Me.” Using markers from the art classroom, some students opted to scribble critical messages and profanities on the pictures‘ — and found here).