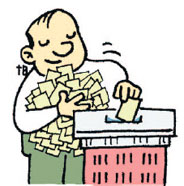 A peep-hole into the soul of government can be witnessed during this mad-cap debt ceiling bullshit — one can see just how far a small, small portion of the population can near-about bring down a country.

The crying, finger-pointing, wailing — i.e., John ‘The Boner‘ Boehner telling his beloved own to â€œget your ass in lineâ€ — comes from the complete horror-disarray caused by those ignorant Tea Baggers, who apparently rule the GOP nowadays.
To the anguish of all US peoples.
(Illustration found here).

One could single out Jackboot John McCain for allowing the Tea Party to emerge — when he appointed Sarah Palin as his VP choice in 2008, the move allowed dumb-ass stupid to become part of the national political discourse.
Stupid touched a deep chord with the stupid, who most times has a much bigger mouth than the norm.
And why would the words “death panels” cause so much trouble during the health care debate?
A little stupid goes a long, long way.

Scientists at Rensselaer Polytechnic Institute have found that when just 10 percent of the population holds an unshakable belief, their belief will always be adopted by the majority of the society.
…
“When the number of committed opinion holders is below 10 percent, there is no visible progress in the spread of ideas.
It would literally take the amount of time comparable to the age of the universe for this size group to reach the majority,â€ said SCNARC Director Boleslaw Szymanski, the Claire and Roland Schmitt Distinguished Professor at Rensselaer.
â€œOnce that number grows above 10 percent, the idea spreads like flame.â€
As an example, the ongoing events in Tunisia and Egypt appear to exhibit a similar process, according to Szymanski. â€œIn those countries, dictators who were in power for decades were suddenly overthrown in just a few weeks.â€
…
An important aspect of the finding is that the percent of committed opinion holders required to shift majority opinion does not change significantly regardless of the type of network in which the opinion holders are working.
In other words, the percentage of committed opinion holders required to influence a society remains at approximately 10 percent, regardless of how or where that opinion starts and spreads in the society.

So we can see it doesn’t take much to make a lie a truth.
And the Tea Party can just ruin a good get-together.
Matt Taibbi, most-likely near-about the best in covering US political bullshit, posted the ultimate view of the Tea Party last September: Vast forests have already been sacrificed to the public debate about the Tea Party: what it is, what it means, where it’s going. But after lengthy study of the phenomenon, I’ve concluded that the whole miserable narrative boils down to one stark fact: They’re full of shit. All of them.
And in the debt ceiling pout match, even the GOP is tied to the nasty Tea Baggers as The Boner right now has his mitts full of trying to keep the whole shebang from blowing up in his cry-baby face.
From TPM: That’s because the GOP is teetering on the brink of a debt-based civil war. More traditional Republicans and big business types are desperate to avoid a recovery-crushing default. But their Tea Party colleagues are leading a rebellion of epic – perhaps even galactic – proportions.

Thus it is.
From Ian Shepherdson of High Frequency Economics via The Big Picture:

â€œThe Speaker is in office, but not in power, because the Tea Partiers do not respect party discipline. They argue that they are standing up for principle, but the principle they have chosen to defend is the idea that the only thing that matters is rapidly and substantially shrinking the government.
This, we respectfully submit, is nuts.
According to polls, itâ€™s not even what most Republican voters want, never mind the country as a whole. Moreover, the first thing you learn from studying the aftermath of financial crises is that premature fiscal tightening is extremely dangerous.â€

So tighten-up the old seatbelt, the bullshit could run the fuel-starved truck of state right off the cliff , then only thing to do is SCREAM.