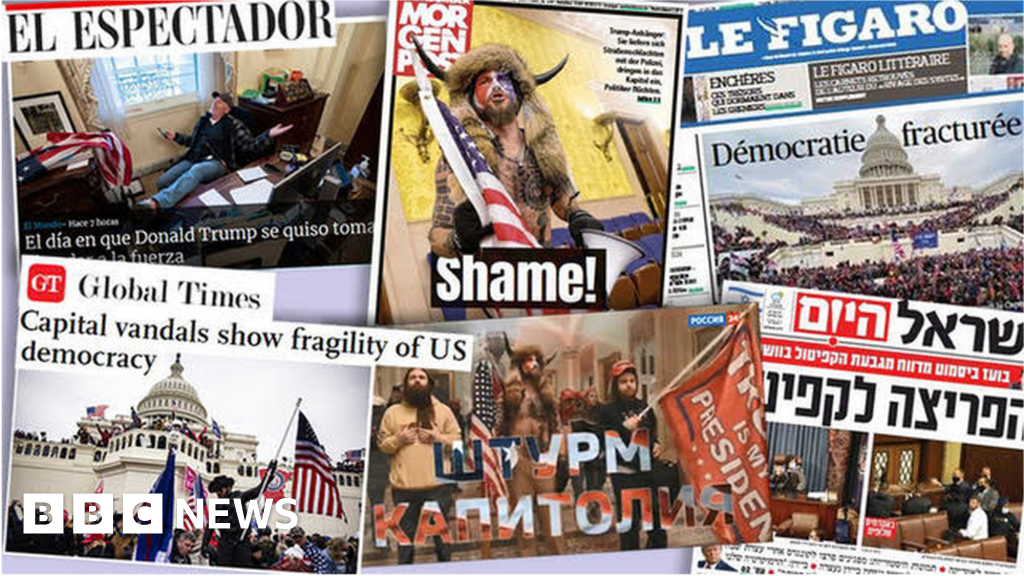 (Illustration of the Capitol riots found at the BBC).

Aside from the national political bullshit off the T-Rump’s acquittal, the whole ball-of-wax is viewed differently in other countries, and since seeingly Republicans aren’t blowing into dust anytime soon, it’s a viable worry — as we here in the US worry, too, but it’s literally closer to home.

How does the rest of the world react to the T-Rump skating? Apparently, they’re like us, bewilderedly bewitched:

Reports of the GOP demise are greatly exaggerated | Analysis https://t.co/nwYmKz22co

This afternoon, an op/ed at CNN by David A. Andelman, journalist, author of “A Shattered Peace: Versailles 1919 and the Price We Pay Today,” and a member of the Council on Foreign Relations, took a look at how the major nations viewed the clusterfuck of the T-Rump — some snips:

The whole world watched the second impeachment of former US President Donald Trump and his acquittal.
In many cases, if media coverage is an indication, the global audience paid rapt attention.

The BBC was one of many outlets that carried the Senate proceedings live.
France24 television broadcast much of the proceedings on their English and French services, with simultaneous translation into French, including the final vote and subsequent responses by Democratic Senator Chuck Schumer and Republican Mitch McConnell — both of whom condemned Trump’s actions, but with McConnell nonetheless voting to acquit the former President.

At the onset of the proceedings, the leading Paris daily newspaper Le Monde carried an enormous photo at the top of its front page of the House impeachment managers marching across the Capitol Rotunda to the Senate floor.
The French publication then followed the proceedings closely, concluding within minutes of the final vote with the headline on its website: “Donald Trump acquitté à l’issue de son second procès en destitution.” (“Donald Trump acquitted at the end of his second impeachment trial.”)

The German national daily paper Süddeutsche Zeitung carried a headline, “Trump also acquitted in second impeachment proceedings,” on its website above a large photo of a grimly smiling Trump holding up a USA Today frontpage from his first impeachment, last year, with the headline, “Acquitted.”
In Nigeria, the Tribune quickly led its website with the headline: “Breaking: With 57-43 Votes, US Senate Quashes Impeachment, Acquits Ex-President Donald Trump.”

It’s likely that much (but not all) of the world has watched not out of pure curiosity or voyeurism but out of horror and fear, that Trump’s actions and the fact that only seven of the 50 Republican senators were willing to vote for his conviction — too few to cross the two-thirds majority threshold needed to convict — have only accelerated the dimming of democracy and freedom America represented.
…
The great fear in many quarters abroad is that Trump’s budding autocracy was not simply a brutal interregnum, and that Biden’s administration is but a brief interlude before America plunges again into the deep spiral that has marked the last four years.
Although UK Prime Minister Boris Johnson claimed Sunday that US democracy remains “strong” in spite of the impeachment “kerfuffle,” Biden himself has warned that democracy is “fragile.”
…
Still, Patrice de Beer, a former editor of Le Monde, said he believes that the world’s view of America has only been reinforced by the chilling images displayed by House managers in the impeachment trial.
“I don’t think that this has changed our vision of the US as an unpredictable and violent country,” he told me via email from Paris.
“But we hope Biden has put a stop to this. For now.”
…
The conclusion from French journalist de Beer was the kind of deeply felt plea that seems to be all but universal across broad swaths of the world.
“Good luck [now] muzzling Trump and his Trumpets.”

And we say to ourselves…

What are we going to do now?