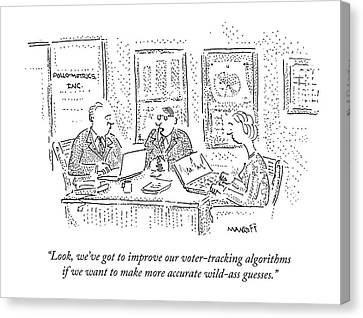 (Illustration: ‘Look, We’ve Got To Improve Our Voter-tracking,’ canvas print by Rpbert Mankoff, and found here).

In an obvious reaction to the T-Rump and Republicans in general the past four years (especially the last couple), the majority of Americans are tending to slip leftward in response to the clusterfuck hoisted upon them with GOP-influenced COVID malfeasance, insurrection, election lies and general Gaetz-like dumb-ass shit.
Polling reflects the non-goverance performance from Republicans as more and more people are saying Fuck-You to the GOP.

A big one out today is from Gallup:

In Gallup polling throughout the first quarter of 2021, an average of 49=percent of U.S. adults identified with the Democratic Party or said they are independents who lean toward the Democratic Party.
That compares with 40-percent who identified as Republicans or Republican leaners.
The nine-percentage-point Democratic advantage is the largest Gallup has measured since the fourth quarter of 2012.
In recent years, Democratic advantages have typically been between four and six percentage points.
…
The GOP’s hopes of regaining control of the House and Senate it lost in the past two federal election cycles may also depend on how well the party appeals to independent voters, the largest bloc in the U.S., something the Republican Party struggled to do during the Trump administration.

Adding context to the Republican plight is former Republican (and now Independent) Max Boot at The Washington Post this morning:

Most Republicans don’t care that Trump locked up children, cozied up to white supremacists, tear-gassed peaceful protesters, benefited from Russian help in both of his campaigns, egregiously mishandled the pandemic, incited a violent attack on the Capitol and even faced fraud complaints from his own donors.
A new Reuters-Ipsos poll finds that 81-percent of Republicans have a favorable impression of Trump.
Wait. It gets worse: 60-percent say the 2020 election was stolen from him, only 28-percent say he is even partly to blame for the Capitol insurrection, and 55-percent say that the Capitol attack “was led by violent left-wing protestors trying to make Trump look bad.”

This is a portrait of a party that can’t be saved — at least in the foreseeable future.
The GOP remains a cult of personality for the worst president in U.S. history. It has become a bastion of irrationality, conspiracy mongering, racism, nativism and anti-scientific prejudices.

I posted on that ‘delusion‘ yesterday.
And add grifting insanity to the nutcase poll:

It is not a cult https://t.co/IYdyyiuAMQ

Meanwhile, among reality voters, a strong majority support Joe Biden’s plan to raise the corporate tax rate to 28-percent from 21-percent to pay for the infrastructure proposal — via MorningConsult this particular morning:

Sixty-five-percent of registered voters said they strongly or somewhat support funding Biden’s infrastructure plan through 15 years of higher taxes on corporations, while 21-percent somewhat or strongly oppose it.

With Senate Minority Leader Mitch McConnell (R-Ky.) already pledging that there will be no GOP support in Congress for increasing corporate tax rates to fund the infrastructure plan, this could be the Biden administration’s second large spending package pushed through reconciliation, a process that allows a simple majority vote.
…
While the new poll doesn’t mention a specific level of taxation, the concept of raising taxes on corporations to fund Biden’s infrastructure plan is overwhelmingly backed by Democratic voters, with 85-percent support. Just 4-percent of Democrats said they oppose the tax hike.

Republican voters were nearly split: 42-percent back the president’s plan to raise corporate taxes, while 47-percent oppose it.
Independents were much more likely to support funding the infrastructure plan through corporate tax hikes (60-percent) than not (21-percent).

When voters were presented with the choice between making improvements to America’s infrastructure funded through increases to the corporate tax or improving infrastructure only if it were done without the tax increases, 53-percent backed the former option.

People are for this shit, and sick of this shit:

Contributions are a position. https://t.co/LSqo545Qrc

However, being a hypocritical asshole, MoscowMitch tried to walk that shit back today — per The Hill this afternoon:

“I didn’t say that very artfully yesterday. They’re certainly entitled to be involved in politics. They are. My principal complaint is they didn’t read the darn bill,” McConnell said Wednesday at a press conference in Paducah, Kentucky.

The GOP leader softened his tough talk from earlier in the week, when he warned that companies would face “serious consequences” if they become “a vehicle for far-left mobs to hijack our country.”
..,
McConnell’s warning to companies to “stay out of politics” prompted a double take by members of the media who cover McConnell and proponents of campaign finance reform because the GOP leader has raised millions of dollars from corporate PACs and donors during his long career.

“It’s absurd. It’s Sen. McConnell believing he can say completely contradictory things and get away with it. He has spent years defending and seeking funds from corporate executives, from corporate PACs. He led the challenge to the ban on soft money, which included corporate money,” said Fred Wertheimer, the founder and president of Democracy 21, a nonprofit organization that seeks to limit the influence of money in politics.
…
He clarified Tuesday that he did not have a problem with companies spending money on behalf of candidates and political parties, which immediately opened him to charges of hypocrisy.

“I’m not talking about political contributions,” he said.
“Most of them contribute to both sides. They have political action committees. That’s fine. It’s legal. It’s appropriate. I support that.”

Yet he walked it back today. Voters see that holier-then-thou bullshit.
Which is leading people to stay away from religion, and thus, Republicanism — Gallup last week: ‘Americans’ membership in houses of worship continued to decline last year, dropping below 50-percent for the first time in Gallup’s eight-decade trend. In 2020, 47-percent of Americans said they belonged to a church, synagogue or mosque, down from 50-percent in 2018 and 70-percent in 1999.‘
People see the shit in the shit.
Even if it’s not shit: