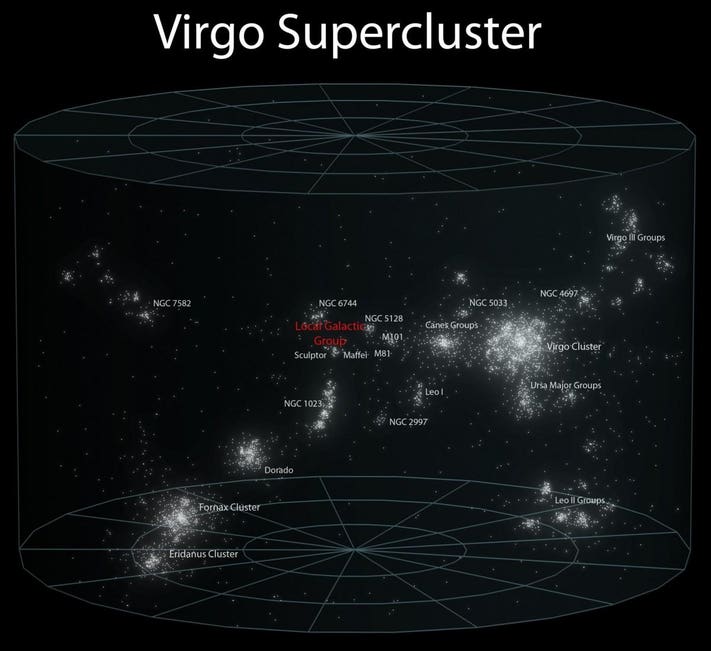 (Illustration: Various galaxies of the Virgo Supercluster, grouped and clustered together, and found here).

Beyond mass shootings and war crimes, how about a little way-out space shit this Monday morning to loose the bonds of everyday terror, maybe expand our horizons past our seemingly dying planet and a coming fracture in space and time to envy Dr. Who — astrophysicist Paul Sutter at Space.com this morning:

It sounds like the premise of a bad sci-fi movie: There’s some mysterious entity, beyond the boundaries of our galaxy, that is pushing against us with incredible force. We don’t know exactly what it is, and we don’t know how long it’s been there. But we do know its name: the dipole repeller.

The name may be a bit dorky, but it’s a very real thing. It’s also nothing to worry about — just a normal consequence of the usual process of structure formation that’s been happening in the universe for [checks watch] 13.8 billion years.

To set the stage for the dipole repeller, we need to go big. And not your usual astronomy-big, with galaxy-scale events and energies.
No, we have to go really big.

Beyond the Milky Way sit a few other galaxies. There’s Andromeda, 2.5 million light-years away, which everyone knows and loves. There’s also Triangulum, which nobody really cares about.
Our three galaxies and a few dozen dwarf galaxies combine to form the Local Group, which is a very unassuming name for a structure a few million light-years across.

Here’s where things get a little tricky. Groups and clusters have decent, understandable definitions: They are gravitationally bound.
Superclusters aren’t; they’re just collections of galaxies that are larger than clusters but smaller than, say, the entire universe. Different cosmologists can apply various definitions of the word “supercluster” and get a range of segmentations.

It’s like a population census trying to define a metro area: Sure, there are the city limits, but what about all the people living near a major city and working in it?
Where, exactly, does it stop?

Maybe not until it sucks the earth into its void.
Additional weird-ass nerdish-info at the link — like this:

Even in the deep space void, here we are once again…