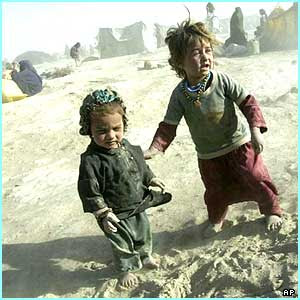 From Jason Ditz at antiwar.com:

NATO is scrambling to do damage control tonight after a number of weekend incidents led to the deaths of Afghan civilians, including several children.
US troops killed two civilians, including an eight year old girl in a shooting in Logar Province, while NATO air strikes in the Helmand Province killed another three civilians and wounded a number of children.
NATO troops also shot and killed a child in Kandahar Province.

In war, a parent’s anguish never abates and is never quiet.
One of the horrors of being a parent is seeing/and/or hearing about one of your kids getting hurt, in trouble, or the worst of the unspeakable — getting killed.
And in this time of pure war, parents all over the planet are mourning.
According to UNICEF: Between 1945 and 1992, there were 149 major wars, killing more than 23 million people, including two million children killed, four to five million disabled, 12 million left homeless, more than 1 million orphaned or separated from their parents and some 10 million psychologically traumatized.
And those records are now two decades along — more than enough branches on Anne Frank’s Tree.

Since March 2003, 4,424 US military service people have died in Iraq with 31,964 wounded, while in the ongoing second theater of slaughter, Afghanistan, where after nearly nine whole years of fighting, 1,206 US troops have died with more than half that total killed in the last two years alone — 354 this year and 303 in 2009.
A nasty, terrifying ordeal for the more than 6,000 set of parents, along with other relatives and friends.

The anguish of war for parents also in the horror of the US war machine.
Case in total point, the parents of Spc. Adam Winfield, shown at left in an undated photo with their son, who is accused along with four other US Army personnel of murdering Afghan civilians “for sport,” despite Adam’s attempts to warn his dad about the situation.

Winfield wrote his father, Chris, on Feb. 14 about his concern that two members of his platoon had the previous month murdered “some innocent guy about my age just farming.”
The correspondence from that day illustrates the young soldier’s horror at the murder, and also reveals a shocking indifference about the killing among the other troops in his platoon.
“Well, it was two guys who did it actually killed the dude (sic) but the whole platoon knew about it,” Winfield wrote to his father. “Theres (sic) no one in this platoon that agrees this is wrong.”
…
“There are no more good men left here,” Winfield wrote in the Feb. 14 exchange released to Salon by Chris Winfield through his attorney, Neal Puckett.
At one point, Winfield seemed to echo Sen. John Kerry’s haunting 1971 testimony about Vietnam when Kerry asked rhetorically, “How do you ask a man to be the last man to die for a mistake?”
“I started to think whether I should quit and just give up because itâ€™s stupid to get smoked in Afghanistan,” Winfield wrote.
“The Army really let me down when I thought I would come out here to do good maybe make some change in this country I find out that its all a lie (sic).”

Adam’s dad tried to alert the Army, but he was shit-out-of-luck:

Chris Winfield has said that he made multiple calls to the Army (including at least four to various offices at Fort Lewis) in an effort to report the murder his son described to him. On Friday, the Army announced that it is investigating this claim.
…
He said nobody ever got back to him. Members of his son’s platoon allegedly committed at least two more murders in the months that followed.
The Army has now implicated Adam Winfield in one of those later killings.
“The Army had the opportunity and they dropped the ball,” Chris Winfield said.
“The Army has the blood on their hands on those two [later] murders.
They want to sweep it under the carpet and make it disappear,” he claimed.
“I’m not going to let them do that.”

War is bad, ugly shit for parents, too.