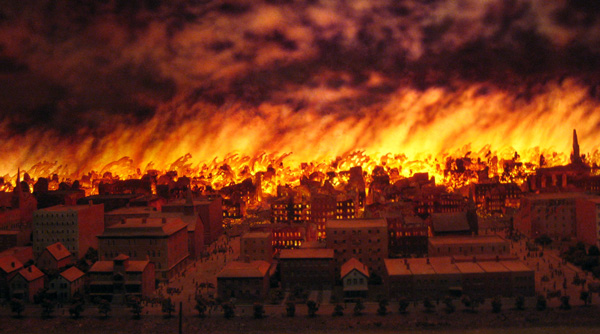 Another dire study on the state of nowadays.
Although climate change, peak oil and all the assorted ugliness associated with both have been flashed around the news wire for months, if not years, nothing appears to be in the real/actual works to handle the mess — one little peak of light is the recent report that last year emissions from burning coal, oil, and natural gas fell 1.3 percent compared with emissions in 2008.
Of course, there’s a however: Even so, concentrations of CO2 rose last year to a level where, for every 1 million molecules of gases in the atmosphere, 387 of them were carbon dioxide. By contrast, the average level for 2008 was 385 ppm.
One for another as science seems to indicate 350 ppm is the top level for humans to exist in some decent, civilized fashion.

The new study comes from the University of California, Santa Barbara, and its climate project/papers operation.
The report — titled “Peak Energy, Climate Change, and the Collapse of Global Civilization: The Current Peak Oil Crisis” — is a PDF eBook and big (300 pages),Â but a synopsis of the report can be found atÂ the UCSB Website and also here. [with a great h/t from The OilDrum].
Some of the findings:

â€¢ Peak oil is happening now
â€¢ The era of cheap and abundant oil is over
â€¢ An additional 64 mbpd of gross capacity â€“ the equivalent of six times that of Saudi Arabia today â€“ needs to be brought on stream between 2007 â€“ 2030 to supply projected business as usual demand
â€¢ Most governments and societies â€“ especially those that are developed and industrialized â€“ will be unable to manage multiple simultaneous systemic crises. Consequently, systemic collapse will likely result in widespread confusion, fear, human security risks, and social break down
â€¢ Peak oil and the events associated with it will be an unprecedented discontinuity in human and geologic history
â€¢ Adaptation is the only strategy in response to peak oil
â€¢ Current trends in land, soil, water, and biodiversity loss and degradation, combined with potential climate change impacts, ocean acidification, a mass extinction event, and energy scarcity will significantly limit the human carrying capacity of the Earth
â€¢ Based on these estimates, the global population may have nearly reached or already exceeded the planet’s human carrying capacity in terms of food production.

So there you are.
And the bottom line:

The findings clearly indicate that the convergence of peak energy resources and dangerous anthropogenic climate and environmental change will likely have a disastrous impact in the near-and long-term on the quantity and quality of human life on the planet.

Although mayors of some major highly-polluted cities across the globe signed a voluntary pact Sunday in Mexico City to reduce greenhouse gas emissions (a kind hope-filled preview to the UN-sponsored climate talks in Cancun opening next week), it might be too little too late.
As a result, life could get real ugly.