George Jr. and his boys apparently pissed away more hard cash than was originally reported, maybe three times as much — displaying the dumb-ass norm for the entire Iraqi debacle. 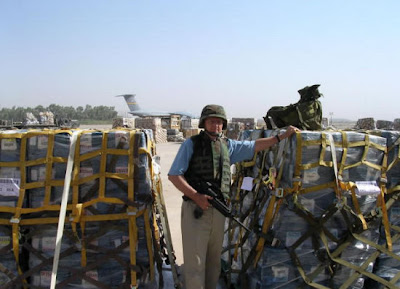 In that photo above, a guard stands next a few pallets of shrink-wrapped $100 bills.
Twenty US C-130 aircraft flew the tons and tons of the money into Baghdad in 2003 to help rebuild the country, restore order, bribe people, and so on — another shitty idea gone even more shitty.

From the UK’s The Guardian in February 2007 on a memorandum to US Congress from the Bush White House:

“One CPA official described an environment awash in $100 bills,” the memorandum says.
“One contractor received a $2m payment in a duffel bag stuffed with shrink-wrapped bundles of currency. Auditors discovered that the key to a vault was kept in an unsecured backpack.
“They also found that $774,300 in cash had been stolen from one division’s vault.
Cash payments were made from the back of a pickup truck, and cash was stored in unguarded sacks in Iraqi ministry offices.
One official was given $6.75m in cash, and was ordered to spend it in one week before the interim Iraqi government took control of Iraqi funds.”

Fast forward to last week and the LA Times:

For the first time, federal auditors are suggesting that some or all of the cash may have been stolen, not just mislaid in an accounting error.
Stuart Bowen, special inspector general for Iraq reconstruction, an office created by Congress, said the missing $6.6 billion may be “the largest theft of funds in national history.”

And now this morning from Aljazeera English:

Osama al-Nujaifi, the Iraqi parliament speaker, has told Al Jazeera that the amount of Iraqi money unaccounted for by the US is $18.7bn — three times more than the reported $6.6bn.
Just before departing for a visit to the US, al-Nujaifi said that he has received a report this week based on information from US and Iraqi auditors that the amount of money withdrawn from a fund from Iraqi oil proceeds, but unaccounted for, is much more than the $6.6bn reported missing last week.
“There is a lot of money missing during the first American administration of Iraqi money in the first year of occupation.
“Iraq’s development fund has lost around $18bn of Iraqi money in these operations – their location is unknown. Also missing are the documents of expenditure.
“I think it will be discussed soon.
There should be an answer to where has Iraqi money gone.”
…
Al Jazeera’s Iraq correspondent, Jane Arraf, reporting from Baghdad, said:
“It’s an absolutely astonishing figure — this goes back to 2003 and 2004.
“There is going to be a fairly wide net cast – some of them [involved in mishandling of this money] are thought to be US officials, but many here believe that it is the Iraqis who have filled their pockets.
“Safeguarding the money was up to the Americans … after the invasion, provisional authority here was run by the American military.
“Piles and piles of shrink-wrapped US dollars came here, but the cash coming in is not the important part – it is what happened to it after [it got here].

How could this have happened?
First just $6.6 billion missing, now three times that?

A wrap-up (from the Guardian link) of the whole chilling Iraqi adventure and a display of the mind-set of George Jr.’s boys came from that 2007 US House committee on oversight and government via testimony from Admiral David Oliver, then Paul Bremer’s financial advisor (Bremer, if one wanted to remember, was the nit-twit in charge after the invasion who made a horrible thing much more horrible):

Asked what had happened to the $8.8bn he (Oliver) replied: “I have no idea.
I can’t tell you whether or not the money went to the right things or didn’t — nor do I actually think it’s important.”
Q: “But the fact is billions of dollars have disappeared without trace.”
Oliver: “Of their money. Billions of dollars of their money, yeah I understand.
I’m saying what difference does it make?”

Yeah, you frickin’ asshole, what difference does it make?
And from Henry Waxman during the same committee meeting: “The numbers are so large that it doesn’t seem possible that they’re true. Who in their right mind would send 363 tonnes of cash into a war zone?”

UPDATE: It’s now been four hours since I posted this story — no telling how many hours since Aljazeera English put up its story on the $18 billion missing and yet not one, and I mean, not one news outlet in the US, including CNN, the New York Times, even the Huff Post, have uttered (written) a word about it.
More than strange.